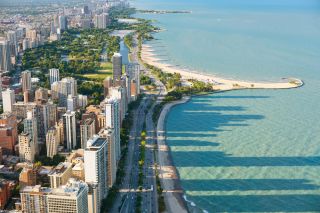 The Lake Shore in Chicago is lined with beaches.
(Image: © SergiyN | Shutterstock)

Lake Michigan is the third largest of the Great Lakes (when measured by water surface) and the only Great Lake located entirely in the United States. Its name is derived from the Ojibwa Indian word mishigami, meaning large lake.

There are a number of beaches along the coast, and the Great Lakes are sometimes referred to as the “Third Coast” behind the Pacific and Atlantic (the Gulf Coast notwithstanding). Some of the most popular “beach” towns on the Michigan side of the lake include St. Joseph, South Haven, Grand Haven and Holland.

On the northern end, Lake Michigan and Lake Huron are connected by the Straits of Mackinac, a 4- to 5-mile-wide (4.6 to 8 kilometers) channel, and technically, these two bodies of water are one lake.

Water temperatures on Lake Michigan make it to the 60s in July and August and can sometimes make it into the 70s when air temperatures have been in the 90s for a number of continuous days.

The water of Lake Michigan has an unusual circulatory pattern — it resembles the traffic flow in a suburban cul-de-sac — and moves very slowly. Winds and resulting waves keep Lake Michigan from freezing over, but it has been 90 percent frozen on a number of occasions. Ocean-like swells, especially during the winter, can result in a drastic temperature changes along the coast, shoreline erosion and difficult navigation.

Marshes, tallgrass prairies, savannas, forests and sand dunes that can reach several hundred feet, all provide excellent habitats for all types of wildlife on Lake Michigan.

Trout, salmon, walleye, and smallmouth bass fisheries are prevalent on the lake. The lake is also home to crawfish, freshwater sponges and sea lamprey, a metallic violet species of eel.

The lake is also home to a wide range of bird populations, including water birds such as ducks, geese and swans, as well as crows, robins and bald eagles. Predatory birds such as hawks and vultures are also prevalent on the lake, due to the wealth of wildlife to feast upon.

The pebble-shaped Petoskey stone, which is a fossilized coral, is unique to the northern Michigan shores of Lake Michigan and is the state stone.

The formation that is recognized as Lake Michigan today began about 1.2 billion years ago when two tectonic plates were ripped apart, creating the Mid-Continent Rift.

French explorer Samuel de Champlain sent his underling Jean Nicolett to find the “Northwest Passage” but he ended up discovering Lake Michigan around 1634. In 1679, Nicolette explored the southernmost part of the lake where modern-day Chicago is.

Like all of the Great Lakes, Lake Michigan has had its share of shipwrecks. One of the most famous maritime disasters was the sinking of the Westmoreland, a steamer that sank on Dec. 7, 1854. The wreck was discovered by a diver on July 7, 2010, 155 years after the accident, in excellent condition.

Before the invention of radar in the 1940s, the Straits of Mackinac could be an extremely dangerous area to navigate. Ships were at the mercy of unpredictable storms, dangerous currents, fog, ice, shallow areas and rocky shoals. A number of ships met their demise trying to pass through this skinny channel — so many, in fact, that an underwater preserve was eventually created where divers can explore these sunken ships.

This preserve, known as the Straits of Mackinac Underwater Preserve, contains 12 marked shipwrecks. Some of the wrecks on the Lake Michigan side include the Sandusky, the Maitland and the Eber Ward.

The Sandusky, the oldest known ship in the preserve, was heading from Chicago to Buffalo with a cargo of grain in September 1856 when it was struck by a violent gale, according to the preserve’s website. There were no survivors. In June 1871, the Maitland was carrying a load of corn from Chicago to Buffalo when she collided with two ships. The crew was able to jump into their yawl boat, and no lives were lost. In 1909, the Eber Ward, a 213-foot-long (65 meters) wooden freighter, left Chicago, picked up a cargo of corn in Milwaukee and was on its way to Port Huron when it was gashed by ice, sinking within 10 minutes and killing five crewmen.

Today, passing through the Straits of Mackinac is much safer thanks to the use of advanced radar and icebreakers — ships designed to break through ice so that other boats can safely pass. Nearly four dozen lighthouses still stand along the beaches of Lake Michigan, a reminder of the area’s great shipping history.