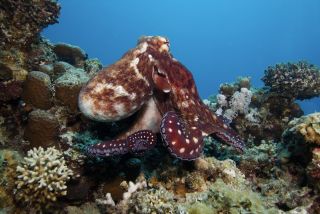 Everyone knows that octopuses have eight sucker-covered arms. And if you're a linguistic know-it-all, you're probably well aware that they're called octopuses and not octopi. But did you know that all octopuses have venom? Or than some have been seen using tools? Here are eight awesome things we learned about the cephalopods from reading Katherine Harmon Courage's book "Octopus! The Most Mysterious Creature In the Sea" (Current 2013).

They eat their arms when bored

Stewards of captive octopuses take heed: Compared with octopuses living in tanks full of interesting decor like shells and flowerpots, octopuses living in more spartan conditions become pretty stressed out, one study found. Some even turn to a disturbing behavior known as autophagy, or eating their own appendages, in such non-stimulating environments.

All octopuses are thought to have some venom that comes from bacteria living inside the animals. Most don't have enough poison to harm people. But a bite from a small blue-ringed octopus can paralyze a human adult in minutes.

Yes, like chimpanzees, dolphins and crows, octopuses are among the special set of intelligent animals that have been observed using tools. In 2009, scientists reported they had watched veined octopuses (Amphioctopus marginatus) picking up discarded coconut shells and using them like mobile homes.

"While I have observed and videoed octopuses hiding in shells many times, I never expected to find an octopus that stacks multiple coconut shells and jogs across the seafloor carrying them," said researcher Julian Finn, a marine biologist at the Museum Victoria in Australia, at the time. [Read full story on the mobile home-building octopus]

They can open childproof pill bottles

Well, at least a female giant Pacific octopus named Billye can. Biologists at the Seattle Aquarium put Billye's strength and smarts to the test with a bottle-opening challenge. The clever cephalopod was able to unlock the top and access her snack in five minutes. Perhaps that's unsurprising for a creature known to open clam shells and other stubborn-shelled mollusks without a shucking knife. [The 5 Smartest Non-Primates on the Planet]

They're masters of camouflage

An octopuses can change the color of its entire body in just three-tenths of a second. But the creature doesn't simply take on the general pattern of its surroundings. Instead, it often mimics specific undersea objects, like plants or rocks, to disappear into the underwater scenery.

They live fast and die young

For all of their amazing abilities, octopuses have short lives that typically last only a few years. Some species drop dead after just six months.

Their suckers are the strong but sensitive type

Man-made suction cups pale in comparison to natural ones that cover the undersides of octopus arms. A common octopus has about 240 suckers on each limb, and a particularly large sucker can hold up to 35 lbs. The suckers are also extremely sensitive; they can pick up subtle chemical signals and move individually, even folding in half in a pinching gesture.

True, humans are prone to projecting their own qualities on the rest of the animal world. But anecdotes from aquariums and biology labs suggest octopuses are very curious and need stimulation. They might even engage in what humans would call "play." A scientist quoted in "Octopus!" tells a tale of one specimen pushing a plastic bottle over and over again at a stream of water flowing into its tank — almost like it was bouncing a ball underwater.

To learn more about these amazing creatures, read our Q&A with Katherine Harmon Courage, or check out her book .