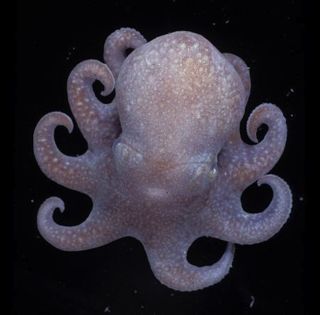 Octopuses in Antarctica survive subzero temperatures because of blue pigment in their blood, a new study finds.

The ice-cold temperatures in the Southern Ocean surrounding Antarctica range between 28.8 degrees Fahrenheit (minus 1.8 degrees Celsius) to 35.6 degrees F (2 degrees C). In such frigid conditions, animals have a harder time transporting oxygen throughout their bodies and therefore delivering it to tissues.

To cope, Antarctic octopuses use a copper-based protein called haemocyanin. It makes their blood run blue and is much more efficient at keeping their bodies properly oxygenated at freezing temperatures. [8 Crazy Facts About Octopuses]

"This is the first study providing clear evidence that the octopods' blue blood pigment, haemocyanin, undergoes functional changes to improve the supply of oxygen to tissue at subzero temperature," lead study author Michael Oellermann, a biologist at the Alfred Wegener Institute, Helmholtz Centre for Polar and Marine Research in Germany, said in a statement.

To find out what keeps an octopus’s body oxygenated, Oellermann and his colleagues compared haemocyanin levels in an Antarctic octopus species (Paraledone charcoti) and in two species that live in warmer climates (Octopus pallidus in southeast Australia and Eledone moschata in the Mediterranean).

Although the Antarctic octopus is far more adept at producing oxygen in cold waters than its warm-water counterparts, these animals actually thrive when the water is a balmy 50 degrees F (10 degrees C), rather than at 32 degrees F (0 degrees C), which is typical in the Southern Ocean’s lowest latitudes.

"This is important because it highlights a very different response compared to Antarctic fish to the cold conditions in the Southern Ocean," Oellermann said. "The results also imply that due to improved oxygen supply by haemocyanin at higher temperatures, this octopod may be physiologically better-equipped than Antarctic fishes to cope with global warming," he said.

The Antarctic octopus’s ability to adjust its blood oxygen supply to suit variable temperatures could help it cope with warming temperatures as a result of climate change. But, this "blue blood" also helps explain why different species of octopuses live in such diverse environments, ranging from the freezing waters around Antarctica to the warm equatorial tropics.

The study was published March 11 in the journal Frontiers in Zoology.