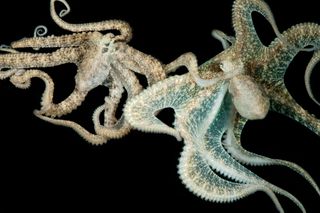 It takes many neurons to change the color and skin texture of these two octopuses (Abdopus aculeatus), seen here mating.
(Image: © Roy Caldwell)

In 2014, one of Roy Caldwell's octopuses went missing.

Caldwell, a professor of integrative biology at the University of California, Berkeley, had kept the reef octopuses (Abdopus aculeatus) he and his team collected on Lizard Island in Australia in separate, sealed tanks. Puzzled, he peered into the female octopus's tank and found spermatophores, the capsules that contain octopus sperm, floating in the water. He looked closer and found the male there, too, buried in the gravel.

The only way the male octopus could have made it into the female's tank, Caldwell said, is for the male to have wriggled through the pipe that fed water into both octopuses' tanks, an act some might deem proof of a calculated nighttime tryst.

Given the abundant neurons in an octopus — a whopping 500 million — individual personalities and anecdotes of octopuses playing, it's easy to imagine they are smart creatures. But is this just a matter of seeing intelligence where we want it to be? [Video: Watch a Clever Octopus Make Like a Flatfish]

So, are octopuses card-carrying brainiacs?

To Caldwell, the quantity of neurons alone isn't an indicator of intelligence, which he defines as flexibility, or the ability to alter behavior from past experience. He suspects that many of an octopus's neurons — three-fifths of which are located not in the brain but in the neve cords that extend down the octopus' arms — are used for movement and to control its skin appearance.

Unlike humans, restricted by the range of motion of our joints, octopuses — soft but for their beaks — have no such limitations. As such, moving its body and eight arms requires more neurons than human movement.

Many other neurons are devoted to altering the appearance of an octopus's skin. It takes a lot of neurons to control an octopus's chromatophores — pigment-containing cells — and skin texture, which make it possible for octopuses to transform from blotched and thorny to solid and smooth in a matter of seconds.

Octopuses may also put some of their neurons to use for planning, according to Jennifer Mather, a professor in the Department of Psychology at the University of Lethbridge in Alberta, Canada, who has been studying octopuses since the mid-1980s. Like Caldwell, she defines intelligences as using information from the environment to alter behavior, although she also thinks this information can be used to make decisions.

Mather's assumption that octopuses plan ahead is based on observations other researchers have made in the western Pacific on the coconut octopus (Amphioctopus marginatus), which is known for its ability to carry around coconut halves and opened coconut shells before clamping the two sides closed around their bodies for protection. To Mather, it's key that these octopuses carry the coconut halves or shells and don't just scrunch into their new shelter at the site where they found the shells. [8 Crazy Facts About Octopuses]

Whether or not an animal plays may offer a glimpse into the creature's intelligence, as some intelligent creatures play, though it's a tricky concept to define. According to psychology professor Gordon Burghardtat the University of Tennessee, play can be defined as actions that are spontaneous, repetitious, voluntary, performed by healthy subjects, and don't alone improve survival. Although it can resemble non-play behavior, it must be a modified or exaggerated form of this other behavior. Children slurping juice into their mouths and swallowing doesn't fit the definition of play. However, children slurping juice into their mouths and spraying it all over the carpet — repeatedly — qualifies.

Knowing that boredom can be a catalyst for play, Mather and her colleague Roland Anderson, a biologist at the Seattle Aquarium when he conducted the research but who died in 2014, put eight giant Pacific octopuses (Enteroctopus dofleini) in individual tanks with nothing but a floating pill bottle. At first, the octopuses brought the bottle to their mouths before letting it go. Two of the eight octopuses, though, took this one step further — they aimed a jet of water at the pill bottle, which then boomeranged back, thanks to the water intake at the other end of the tank, an act they repeated a dozen times.

Anderson, upon observing one of the octopuses performing this behavior, called Mather and exclaimed, "She's bouncing the ball!"

In another study, Mather and her team observed one of their 14 common octopuses (Octopus vulgaris)passing a block composed of Legos between its arms more than six times, which the researchers categorized as play. Although other octopuses in the study interacted with the block of Legos — and a whimsical-sounding snowflake-shaped Lego construction — none passed it between their arms, pushed, pulled or towed it enough for the researchers to classify the act as play.

"That we do see play, we don't see a lot of it, but we do see it and we see it in juveniles and adults the same amount, suggests that it's something like an overflow of exploration of the environment and testing of what's going on around you and figuring out how things work. Sort of like having excess cognitive space," Mather said. She is careful to point out that the type of play she's seen in octopuses is with objects, not with other octopuses. (Not surprisingly, as octopuses are cannibals.)

Although Caldwell, too, has seen octopuses manipulate objects, he's not as certain as Mather about what to call this behavior. He has observed a Pacific reef octopus (Octopus cyanea) catching and releasing a cork bobbing around at the surface of its aquarium.

"Whether that is play, I don't know," he said, noting that sustained catch-and-release in a kitten can be considered play. "In more rational moments, I would think [the octopus is] merely examining [the cork] to see if it's edible."

Intelligent animals tend to display personality traits, individuals' distinctive long-standing behavioral characteristics. And while individuals of the same species, such as octopuses, can vary drastically when it comes to boldness and aggression, whether this indicates that octopuses are intelligent is another story.

Caldwell is the target of a larger Pacific striped octopus he keeps in his Berkeley lab — whenever he gets close to this particular octopus, it squirts him with water. This isn't just a foul-tempered octopus, as it doesn't squirt other members of the lab as often. Nor is it an indication of how distasteful octopuses may find Caldwell, as this doesn't happen with other octopuses of the same species. [Release the Kraken! Giant Squid Photos]

Since spraying is a defensive behavior, Caldwell interprets the frequent squirts as a sign the octopus doesn't want Caldwell around. But does he take this as a sign of that particular octopus' intelligence?

"I could just as easily say I take it as an indicator of its irritation," he replied.

Mather has a different take on octopuses' individual personalities.

"I think the more complex the nervous system, the more space there is for individual variation," she said. "And we would presume, of course, that the more intelligent an animal is, the more different ways it's likely to use the environmental variation that it sees in front of it."

So is Caldwell's escaped octopus smart?

The tourists who visited Caldwell's Lizard Island lab seemed to think so, when he told them the story of how his male octopus wriggled its way into the female's tank through the water pipe. They may have imagined that the octopus ascended into the tube abuzz with amorous intent.

Although Caldwell can't say for sure whether the octopus was intelligent enough to plan such a feat, he sees the male octopus's success differently.

"I think it was just luck and based on the fact that octopus like to explore tubes," he said.