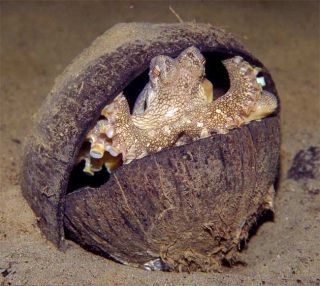 An octopus that uses coconut shells as portable armor is the latest addition to a growing list of animals that use tools.

The veined octopus (Amphioctopus marginatus) apparently can stack discarded coconut shell halves just as one might pile bowls, sits atop them, makes its eight arms rigid like stilts, and then moves the entire heap across the seafloor. These soft-bodied creatures perform this ungainly "stilt walking" to use the hard shells for shelter later when needed.

The discovery was a lucky accident.

"While I have observed and videoed octopuses hiding in shells many times, I never expected to find an octopus that stacks multiple coconut shells and jogs across the seafloor carrying them," said researcher Julian Finn, a marine biologist at the Museum Victoria in Australia.

In recalling the first time that he saw this behavior, Finn added, "I could tell that the octopus, busy manipulating coconut shells, was up to something, but I never expected it would pick up the stacked shells and run away. It was an extremely comical sight — I have never laughed so hard underwater."

The researchers were originally investigating the mimic octopus (Thaumoctopus mimicus) — a species that can impersonate the appearance and movements of snakes, fish and other creatures — when they chanced upon this unusual tool use on the part of the veined octopus.

"Complex behaviors are not the exclusive realm of 'higher' vertebrates," Finn told LiveScience. "Even the soft-bodied octopus, a relative of the snail, is capable of amazing tricks."

Although hermit crabs do use discarded seashells as homes, "there is a fundamental difference between picking up a nearby object and putting it over your head as protection versus collecting, arranging, transporting — awkwardly — and assembling portable armor as required," said researcher Mark Norman, head of science at the Museum Victoria. They suggest the octopuses used large empty seashells before people began discarding coconut shells nearby.

Many animals use tools

Tool use was once thought of as a defining feature of humans, but over the years the number of known animals using tools has grown to include other primates, as well as dolphins, elephants, birds and other creatures. These new findings are the first reported instance of an invertebrate that acquires tools for later use.

"The fundamental question is whether this is a sign of learning capacity or inherited," Norman said. As octopuses have no parental care and short, highly vulnerable life cycles, he believes these are hardwired complex behaviors that evolution has selected for "since ancestors of this group moved away from the safety of reefs out onto the exposed muddy seafloor."

The scientists detailed their findings Dec. 14 in the journal Current Biology.