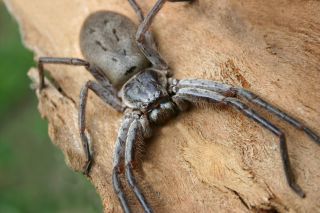 Huntsman spiders are large, fast spiders distributed in warm climates throughout the world. They are notable for the way that they catch their prey.

Huntsman spiders "don't build webs to catch prey," explained entomologist Christy Bills, Invertebrate Collections manager at the Natural History Museum of Utah. Rather, they hunt down their prey, a habit that gives them their common name.

There are thousands of subspecies in this family (Sparassidae). The average huntsman spider species is about 1 inch (2.5 centimeters) long with a leg span of up to 5 inches (12.7 cm). The giant huntsman spider, however, has a leg span of up to 12 inches (30 cm), making it the largest spider by diameter; it is often described as being "the size of a dinner plate." Peter Jäger, head of the arachnology department at the Senckenberg Research Institute in Frankfurt, Germany, discovered the giant huntsman in a cave in Laos in 2001, according to the World Wide Fund for Nature (WWF). Only a few people in the world have seen this behemoth arachnid.

The largest spider by weight is probably the goliath birdeater tarantula, according to the Conservation Institute.

Because of their size, huntsman spiders are sometimes incorrectly identified as tarantulas. One way to tell a huntsman from a tarantula is by the position of the creature's legs. Most spiders' legs bend vertically under the body. "Huntsman spiders usually have legs that are splayed out to the sides, crablike," said Bills. In fact, huntsman spiders are also referred to as giant crab spiders.

Huntsman spiders' legs have twisted joints, which allow the appendages to extend forward like a crab's. Their alignment allows them to move side-to-side, further explaining the crab nickname. Males have longer legs, although females have larger bodies. "Colors and patterns vary," Bills said. The spiders' legs are typically gray or brown, and banded.

Many huntsman species' bodies have a flattened appearance, ideal for squeezing into tight places, according to the Australian Museum.

According to the Integrated Taxonomic Information System (ITIS), the taxonomy of giant huntsman spiders is:

The giant huntsman was found in Laos, and most huntsman species are native to Asia. They are also prevalent in Africa, Australia and South America, according to the BBC. They live in some warm American states such as Florida, California and Texas, and, according to the Conservation Institute, it is presumed that they were introduced from Asia. It is sometimes said that they traveled from Asia in boxes of bananas, and because of that, they are sometimes called banana spiders.

Bills extolled the huntsman's speed: "They can often be quite large and very quick." In fact, the huntsman spider can move up to a yard (almost 1 meter) a second, she said. The spider typically lives under loose bark on trees, under rocks, in crevices and under foliage. Huntsman spiders, especially Australian species, are notorious for entering houses and cars. According to the Australian Museum, they have been "found hiding behind sun visors or running across the dashboard." These spiders can be social, and dozens will sometimes sit together on dead trees or stumps.

The huntsman runs after or ambushes its prey, killing it with venom and strong mouthparts. The Texas Invasive Species Institute pointed out that the huntsman can be a valuable spider because it eats cockroaches, in addition to other spiders and insects.

According to the Australian Reptile Park, the huntsman's bite can be painful to humans, but doesn't cause anything more serious than mild nausea or headaches. Usually localized swelling and pain are the only symptoms.

Compared to other spider species that eat their mates, huntsman spiders are downright romantic. According to the Australian Museum, their mating ritual can last for several hours and involves lengthy caresses and other demonstrations of interest. The male drums his pedipalps — antennae-like appendages near the mouth — against tree trunks before inserting them into the female to fertilize her eggs.

After mating, the female lays up to 200 eggs and encases them in a large, oval, spun-silk sac. "Some huntsmans are dedicated mothers," said Bills. They "look after their egg sacs, guarding them fiercely." According to the University of Florida's Entomology and Nematology Department, some females carry the sac with them under their bodies, which severely restricts their movements. Others place the sac under a rock or piece of bark and stand over it, without eating, for up to three weeks. In both cases, females may become aggressive when guarding their egg sacs.

According to the Australian Reptile Park, at birthing time, the mother may tear the egg sac open to help her spiderlings emerge. She'll then stay with the babies for several weeks. Baby huntsmen are pale in color and darken with each molt.

Huntsman spiders can live for more than two years.