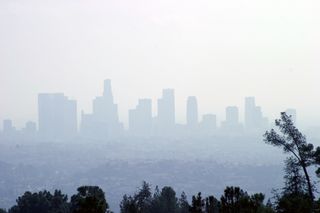 Fernando Miralles-Wilhelm is the director of the Cooperative Institute for Climate and Satellites at the University of Maryland College Park. A hydrologist and water-resources engineer, he has experience working within academia, international development agencies and the private sector.This Op-Ed is adapted from a blog post on Climate Today. Miralles-Wilhelm contributed this article to LiveScience's Expert Voices: Op-Ed & Insights.

Inspiration comes from the strangest of places. About a year ago, I was talking with my good friend Agustín at a party, and he was telling me how he "was not yet convinced" about the impact of humans on climate change. Despite the overwhelming evidence to the contrary, I have heard this many times before.

"I think it's all natural," he said repeatedly while we sipped a little wine. This is the same guy who, also not surprisingly, said just a few years ago that he was "not convinced" that climate change was even real.

I have friends with a broad range of perspectives, and I truly value Agustin's friendship. And later, when I stopped to think more clearly about that conversation, I realized he had actually made an incredibly relevant point; one that for me framed one of the most important science and policy issues of our times. Scientists like me and most of my colleagues have been very active in pointing out the scientific facts about climate change, but have not focused on leading the way on what society can do about this important problem.

So, here is why I think Agustín hit the nail on the head.

Long before climate change appeared on our radar as a grand challenge for society, it was widely recognized that the human population was having an impact on the planet, and that society needed to consider population growth as an important factor in sustainable development — a term people started to use years before climate change. Society's understanding of this notion is not new — in fact, it goes back more than two centuries to the times of Thomas Malthus, and it has taken different forms throughout the years.

However, people have struggled — and continue to do so — with what to do about it. As an example, some of you may remember the population control campaigns promoted in many places around the world in the 1970s, a way to slow down population growth; they did not work. In retrospect, this is not a surprise, as population control, in itself, may not be viable for a variety of reasons, including personal freedom, religious beliefs and economic impacts.

One of today's most prominent sustainability efforts is the incorporation of population growth into the climate-change scenarios published by the Intergovernmental Panel on Climate Change (IPCC). In those scenarios, human population is a factor that defines the input of emissions of greenhouse gases into the atmosphere — the per capita approach. Scientists haven't really arrived yet at a point in the debate, and in collective knowledge, where science and policy can answer how climate change may actually have an impact on human behavior, quality of life and how human change is interacting with the warming planet.

Science needs to tell us how climate and population — two very dynamic variables — change, and in doing so, cause feedback with each other. At the same time, policy efforts need to address how to translate this feedback into actionable adaptation and mitigation measures that are politically, financially, socially and culturally viable.

And this is precisely what Agustín was trying to tell me that day.

Obviously, the issue of how humans impact climate change is a complex one, much more than I can discuss in a single article here. And while I am not saying we will solve the issue any time soon, I will tell you that shying away from a complex problem is the worst way to solve it. I hope to continue to examine many of the current efforts, including my own, to understand and act upon what I think is one of the most important societal problems of our times: untangling the relationship between humans and climate as a matter of development.

Taking my own advice, I have started working on this issue as part of a team of researchers. And I have Agustín to thank for it.

This Op-Ed was adapted from "Population and Climate Change: Thanks to my friend Agustín!" on theUniversity of Maryland Earth System Science Interdisciplinary Center blog Climate Today. The views expressed are those of the author and do not necessarily reflect the views of the publisher. This version of the article was originally published on LiveScience.