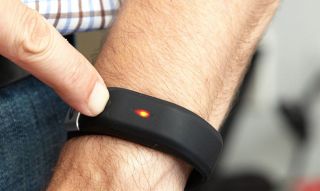 The maker of Bowflex fitness equipment, Nautilus, recently launched an activity tracker called Bowflex Boost. At $49.95, it's one of the least expensive activity trackers on the market (For comparison, the Jawbone Up will cost you $129.99, and the Fitbit Flex goes for $99.95).

But how well does the Boost perform compared to other, more pricey trackers? I tried it out for a few days to see.

The pros of the Boost include its affordable price, adjustable strap and ability to view a month's or year's worth of data on a single graph.

The cons of the Boost are a lack of a screen on the wristband, no tips for how to improve physical activity or sleep, and no way to look up exactly how many steps you took after a day has passed.

The Boost excels in comfort. Made from silicone material, the wristband is flexible, and is designed to coil around the wrist before it is snapped into place with a plastic clasp.

My favorite thing about the Boost has to be the 14 size settings, which allow you to adjust the band so that it fits snuggly around your wrist. Although a simple feature, you'd be surprised at how much less fun a fitness trackeris to wear if it doesn't fit right. I have small wrists, and the Boost fit me much better than some other wristband fitness trackers, such as the Nike FuelBand, which can be only minimally adjusted, and Jawbone Up, which cannot be adjusted at all.

The Boost has just one button on the top of the device, which you press to see your progress — a red, yellow or green light shines to indicates how far you are toward reaching your activity goal for the day — to put the device in sleep mode, or to wirelessly sync the device with your phone.

I found this button somewhat hard to operate. The button needs to be held for three seconds to put into sleep mode, and five seconds to sync. It sometimes took me several tries to get the device into sleep mode, or to sync, even though I was pushing the button down quit firmly. Instead of syncing, the light on the device would simply turn off, and I would have to start over.

The device is simple enough to use. The red, yellow, green lighting system gives you a quick snapshot of your daily activity progress. However, there is no screen on the wristband, so users must look at the app to know exactly how many steps they've taken or calories burned. For people interested in knowing exactly how they're doing "right now," an activity tracker with a screen might be a better fit.

To see your data, you have to download the Boost app, which is currently available only for the iPhone. When you launch the app for the first time, a graphic explains how to use the device, and the meaning of Boost's red/yellow/green lights. (Red means you've reached 0-50 percent of your goal, yellow 51-99 percent and green 100 percent).

Boost tracks the steps you've taken, the calories you've burned and the distance walked. It also tracks your sleep time, and how long it takes you to fall asleep. With the app launched, you simply swipe the screen to switch between viewing your activity and sleep.

Over time, the Boost tracks your weekly, monthly and yearly activity, and can display it in a graph. However, it doesn't store the daily data -- after a day has passed, there's no way for you to view how many steps you took on that day, how many calories you burned, and your distance traveled.

The default settings for Boost's activity goals are 10,000 steps, 500 calories and three miles, although you can adjust these goals if you so choose.

However, the device does not tell you how much activity you need to "be healthy," or how much sleep you need, and does not provide tips to boost your activity or help you get more shuteye. In other words, there's very little "hand-holding" with the Boost.

The device tracks your activity, but it's up to you to figure out how to improve it. (For comparison, the Withings Pulse tells users that the World Health Organization recommends 150 minutes of activity per week, and that most adults need between seven and nine hours of sleep.)

The Boost's light does not shine green until you've reached all three of your goals, for steps, calories and miles. So if you've walked 15,000 steps, but burned only 300 calories, the light remains yellow. This method may help users focus on all three metrics, rather than just one.

A small criticism is that the activity graphs on the app — which show your daily, weekly, monthly or yearly activity — have a Y axis labeled simply as "%." Which begs the question, percent of what?

The Boost tracks your activity, but I can't say it was very inspiring. It does not prompt you to get moving when you have a sedentary day, nor praise you when you meet your goal.

The app also does not allow you to compare your daily activity with others, however, you can share your activity to Facebook and Twitter. But if you're looking for a no-frills device, and you simply need to see your activity numbers for a little motivation, the Boost might be for you.