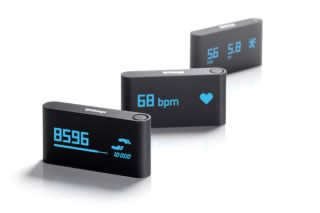 BUY the Withings Pulse >>>
Withings Pulse
Walmart
$128.24
View
We check over 130 million products every day for the best prices

The Withings Pulse is an activity tracker marketed to just about anyone interested in learning more about their daily habits. Released earlier this year, the Pulse tracks total steps, total distance traveled, elevation, calories burned, and your total sleep time and sleep quality. Unlike many other activity trackers, the device also lets you check your heart rate (hence the name Pulse) and track changes over time. As someone who's new to the world of activity tracking, I decided to test out the device for a week to see how easy it is for a layperson to use, and whether knowing such information can really inspire you to try to be healthier. [9 Odd Ways Your Tech Devices May Injure You]

The pros of the Pulse, compared with other fitness trackers, include that it can track your heart rate, be worn on a clip, and provides detailed information about what is considered a "good" or "healthy" amount of exercise and sleep.

The cons of the Pulse are that it has no alarm to wake you up, it's instructions leave you with unanswered questions, and that it does not learn more about you over time.

You can wear the Pulse in several ways: put it in your pocket, attach it to your belt/waistband with a clip (just as you would wear a pedometer) or place it in a wristband to wear like a watch.

I found the belt clip to be the most comfortable way to wear the Pulse. I clipped it on in the morning, and soon forgot that it was there. To me, the "pedometer style" of the Pulse gives the device an advantage over other fitness trackers — like the Up and Fuelband — which must be worn on the wrist. If you have small wrists like I do, or are generally bothered by bracelets, the Pulse might be attractive to you.

The product refers to the wristband as the "sleep wristband," so presumably, it is intended to strap on when you go to bed. I found the wristband to be comfortable — it's made of cloth— and it did not bother me while I slept. I could have also worn the wristband at other times of the day, but with a strap that's 1.5 inches wide, it's hardly inconspicuous.

Overall, the Pulse is very user-friendly. Despite never having used a fitness tracker before, I found the setup to be a breeze. The device comes with a short booklet that has simple instructions with many pictures, so there's no wading through a boring user manual.

It was also fairly intuitive. Each push of the button on the top of the device changes the screen to display a different metric (sleep, calories and steps). And the device app shows a large picture of a butterfly that depicts your progress — as you add more measurements, its wings fill up with color.

However, I also had questions that the instructions didn't answer. I found myself wondering: For how long do I charge the device? (The device turns on right away after charging, and although it showed a full battery within minutes, I unplugged it too soon and had to recharge it when the battery level quickly dropped back down.) Can I wear it in the shower? (No, I found after Googling.) What exactly does it mean by "elevation"? (It doesn't mean your current elevation, but rather how many feet you climb.)

I later tested out the Jawbone Up and Nike+ Fuelband, which have either animations or videos to show you how to use the device. I think those devices benefit from including such visual instructions for newbies.

The Pulse tells you more than just how far you've walked; it also tells you how much physical activity is considered "good." The device prompts you to keep walking until you've reached the goal of 150 minutes of activity per week, which is the amount recommended by the World Health Organization. Such information may be useful for fitness novices who aren't sure what their weekly goal should be.

The device also tracks how many hours you sleep, and the amount of time spent in light and deep sleep. The app tells you how much sleep adults generally need (7 to 9 hours a night) and provides tips to get a better night's sleep.

However, I found myself wondering how accurate the device was at tracking sleep during the night. The Pulse tracks sleep cycles by using an accelerometer to measure movement during sleep, similar to the way an actigraph, a device used in home-sleep studies, does.

However, a 2012 study found that the Fitbit tracker, which also uses an accelerometer to track sleep, was less accurate than a sleep lab test (polysomnography) at determining the total hours slept and the quality of sleep. Generally, activity trackers are more likely to say you are asleep when you are really awake, which means they can overestimate how long you sleep. The Pulse seemed to always tell me it took about 20 minutes to fall asleep, which made me a little suspicious.

The Pulse was fun to use. I was interested to learn how many steps I walk in a day (about 6,500), and how well I slept the previous night. I was also surprised one day over a weekend to learn that I'd walked and run a total distance of 10 miles without even realizing it.

However, after using the device for about a week, the novelty wore off, leaving me wondering why I might continue to use the device, except to perhaps track my mileage during a run. For example, the Pulse does not have a way to compare your activity with that of your friends - an element of some other fitness trackers that can be motivating.

Withings Pulse
Walmart
$128.24
View
We check over 130 million products every day for the best prices