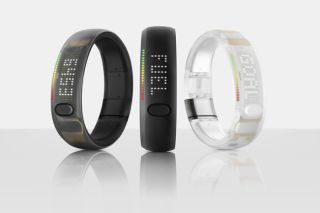 BUY the Nike Fuelband >>>
Nike FuelBand
Amazon
$189.88
View
We check over 130 million products every day for the best prices

The Nike FuelBand is an activity tracker that aims to get you moving, and allows you to compare your activity with others in the Nike+ community. As part of an experiment to become more familiar with activity trackers, I tried out the device to see how easy it was to use, and whether it provided meaningful health information and really inspired me to improve my health.

The main pros of the Nike Fuelband include that it has a clock, allows you to compare your activity with that of other people and displays your daily progress directly on the device.

Cons of the Fuelband include its inability to measure some types of exercise, and its lack of a sleep tracker.

The FuelBand is a single, solid object, so unlike a typical wristwatch, there's no adjustable strap. (In this manner, it is similar to the Jawbone Up, another activity tracker wristband.) The band is taken on and off with a clasp.

But if you bought a size that's slightly too big or small, don't worry. The FuelBand comes with two extensions (called links) that can be added or removed to make the band a smidgen (8 or 16 millimeters) bigger or smaller. I thought this was a clever trick that would save you from having to order a new device if you happened to misjudge your size.

Still, the lack of a truly adjustable strap meant that the band did not fit snugly on my wrist. And if you're not used to wearing wristbands, you might find such a device a little bothersome (as I did).

The Nike FuelBand is intuitive and user-friendly. A short video on the Nike setup website explains how to get started using the device, which is a much easier way to familiarize yourself with the device than reading a user manual.

Once you install the Nike+ Connect software on your computer and create a Nike+ account, you can set a daily goal for daily "NikeFuel points," the brand's way of measuring physical activity. Fuel points (which are based on movement) are calculated the same way for everyone, so you can compare your daily activity with others.

The screen on the FuelBand lets you check your progress throughout the day without needing to plug the device into your computer or sync to your phone to see your data. Pressing the button next to the screen once shows you Fuel points, and pressing it subsequent times shows you calories burned, steps taken and the actual time of day.

For those who want to know how they're doing "right now," the screen interface is an attractive feature. (For comparison, the Jawbone Up does not have an interface, and users must plug the wristband into their phone in order to see their activity levels.)

On the FuelBand, a row of colored lights underneath the main screen gives you a visual summary of your daily progress, lighting up from red to green as you get closer to your goal of taking a certain number of steps.

Plugging the device into your computer and logging into your account gives you more detailed information, including the distance you've traveled and total activity time, as well as how your daily activity compares with your activity in previous days, and how it compares with the average person in the Nike+ community.

NikeFuel points are a nice way to compare your day's activity with other people's, but Nike does not explain how they are calculated (besides to say that more movement equals more points), and so they have little meaning outside the Nike+ world.

The default setting is 2,000 Fuel points for a normal day, 3,000 for an active day, and 5,000 for a high-energy day. But Nike does not tell you how much activity you need to "be healthy." This may leave you wondering exactly what the goal should be: Can you get by with a Fuel point goal lower than the average, and still improve your health? (For comparison, the Withings Pulse tells users that the World Health Organization recommends 150 minutes of activity per week.)

It does require a fair bit of activity to reach 2,000 Fuel points. (On my first day of using the device, about 5,000 steps got me only halfway there.)

The FuelBand has an accelerometer to track movement, and so there are ways to "trick" the device. For instance, raising your arms above your head 10 times will give you the same number of Fuel points as doing 10 jumping jacks. Also, the device does not award you for physical activity in which your wrist remains still, as it would during a pushup. In contrast,  you'll a get a small number of points for driving a car.

The device does not track sleep, so if you're interested in this measurement, you might be better off with a device that does (such as the Fitbit Flex, Up, or Pulse).

The Fuelband also has a clock, which is something the other activity trackers lack. However, the clock does not automatically change when you move into a different time zone.

There's no denying, the FuelBand was designed to motivate you to move. The device screen starts up with a "GO!" to get you moving, and displays a "GOAL" when you've reached you’re your daily goal.

Completing a new record will send a message to your Nike+ account, where you can watch a cute animation of NikeFuel character performing a celebratory dance. And notifications on your account will pop up, asking you to commit to completing a new goal, or "raise the bar" on your current activity.

The app can also track how many times a week you meet a goal, providing even more motivation to keep up the good work.

Nike FuelBand
Amazon
$189.88
View
We check over 130 million products every day for the best prices