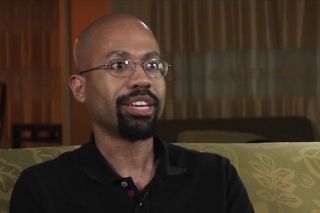 While James Mickens' official title is Microsoft Research (MSR) team member, he is also known by the titles of "funniest man in Microsoft Research" and "Galactic Viceroy of Research Excellence," though the latter, at first, was self-proclaimed.

Mickens earned his undergraduate degree in computer science at the Georgia Institute of Technology and his master's degree and doctorate from the University of Michigan. Originally he thought he would follow in his father's footsteps and become a professor, he said in an interview for Microsoft blog Technet. However, after interning twice with Microsoft, he decided to work for MSR's Distributed Systems Group because "It's hipper than a university and actually more laid back," he said.

Recently, Mickens has been developing Mugshot, a program designed to help debug web-based applications. The app market has grown at a powerful pace, Mickens says, but the tools to help developers build robust, bug-free applications have not kept up. Mugshot is designed as a solution to this.

When he is not coding away, Mickens makes sure to rock out. He is an ardent Black Sabbath fan and also plays in two bands — one metal and one folk metal — both of which consist of a single member.

Mickens believes that there is a need for greater diversity within computer science. He contextualizes the problem, saying, "Most difficult questions are often solved in an unconventional manner. So when you have diversity in the workforce, it helps bring to bear a lot of different perspectives … which means the problems get solved quicker."

While most scientists attribute Einstein or Newton as those who have inspired them, Mickens points to professional basketball player Lebron James. To find out why, watch the video below.