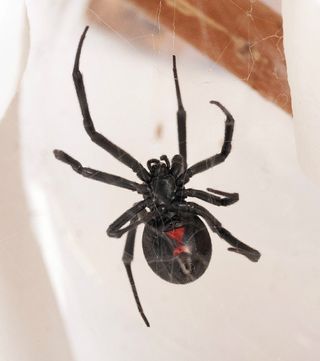 A western black widow, Latrodectus Hesperus. One of the few species harmful to people in North America, a black widow often features a red hourglass shape on its underside.
(Image: © © AMNH\R. Mickens)

Black widow spiders are arachnids that are known for the females' unique appearance and tendency to eat their mates. They are considered the most venomous spiders in North America; however, their bite is rarely fatal to humans.

Male and female black widows look different. In all cases, "the females are the most distinctive, with shiny black bodies and a red hourglass-shaped marking on the underside of their round abdomen," said Jo-Anne Nina Sewlal, an arachnologist at the University of the West Indies in Trinidad. The hourglass marking can, on occasion, also be orange-yellow.

Female black widows are about 1.5 inches long. The males are about half the size of females. Males are lighter in color, with red or pink spots on their backs, according to the North Carolina Cooperative Extension Service at North Carolina State University (NCSU).

Where do black widows live?

Black widows are found in temperate regions throughout the world, including the United States, southern Europe and Asia, Australia, Africa, and much of South America. In the United States, they exist primarily in the South and West. They may be found in dark, dry shelters such as "barns, garages, basements, outdoor toilets, hollow stumps, rodent holes, trash, brush and dense vegetation, according to NCSU.

Like many spiders, the black widow spider eats other arachnids and insects that get caught in their webs. The female spider hangs upside down from her web as she waits for her prey. This pose shows off her bright markings, which, according to a report published by The Society for Integrative and Comparative Biology, are a visible warning to potential predators that she is toxic. The markings, however, do not appear to frighten off prey. That is likely due to differences in how birds and insects perceive color, according to the report's author.

Black widows eat flies, mosquitoes, grasshoppers, beetles and caterpillars, according to National Geographic. After the prey is ensnared in the web, the black widow uses its "comb feet" to wrap the prey in silk. Then, the black widow punctures its prey with its fangs and injects digestive enzymes that liquefy the corpse. The spider then sucks up the fluid.

The black widow's comb foot is a distinguishing feature. "Black widow spiders belong to the family Theridiidae, commonly referred to as comb-footed spiders," Sewlal said, adding that comb-footed spiders get their name "because they have a series of stiff short hairs on the last segment of their fourth pair of legs that resemble the teeth of a comb. This is used to drape the silk over the prey when the spider is wrapping it."

"There are actually a few species in the genus Latrodectus that are referred to as 'black widow' spiders in the United States of America," said Sewlal. There are also red widows and brown widows.

The taxonomy of black widows, according to the Integrated Taxonomic Information System (ITIS), is:

According to Canadian Geographic, black widows are primarily solitary, with the exception of late spring when mating occurs. Female spiders can live up to three years. Males typically live for one or two months.

According to Sewlal, black widows get their name because "females [carry] out sexual cannibalism after mating." The female often kills and eats the male, which explains the males' short lifespans. Sewlal said that scientists theorize the practice occurs "so that the females would get a ready source of protein, which would be beneficial to the offspring now developing inside her. However," she continued, "this is mostly observed in laboratory conditions so that males cannot escape."

The female creates papery egg sacs that contain between 200 and 900 eggs each, according to NCSU. The eggs hatch after about 30 days. The baby spiders are cannibalistic and few survive the three-month development to adulthood.

According to National Geographic, black widows are considered the most venomous spider in North America. Their venom is reported to be 15 times stronger than a rattlesnake's, according to NCSU.

Black widows are highly poisonous; fortunately, they bite humans only when disturbed. Sewlal added, "Only the bites of the females can be regarded as a threat to human health." And contrary to popular belief, most victims do not suffer serious damage. "Bites from this spider very rarely result in death," Sewlal said. "However, individuals at risk include the very young, very old and sick."

The black widow's bite feels like a pinprick to most people, according to NCSU. Pain begins within a few minutes and spreads rapidly to other parts of the body.

"The effects of a bite by a member of this genus depend on the species, but effects can include nausea, profuse sweating, severe pain in abdomen and back, muscle aches, hypertension and paralysis of the diaphragm, which can cause difficulty in breathing," Sewlal said.

Pain may last for eight to 12 hours and the other symptoms may continue for several days, according to the Occupational Safety and Health Administration. Black widow antivenom is available to help minimize damage.