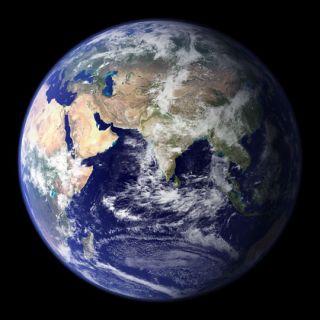 Brenda Ekwurzel is a climate scientist and assistant director of climate research and analysis at the Union of Concerned Scientists (UCS). This article is adapted from one that first appeared as a guest article on MSNBC.com. Ekwurzel contributed this article to LiveScience's Expert Voices: Op-Ed & Insights.

This summer's heat has been brutal. A surprisingly early June heatwave broke records in the western United States. The heat sent people to emergency rooms and stoked wildfires that destroyed homes and lives. Wildfire season in the West — fueled by extreme heat and water stress — is now nearly two months longer than in the 1970s. Europe and Asia recently suffered dangerous heat waves, too.

Extreme events like these are becoming more common. For example, a recent report from the National Oceanic and Atmospheric Associationpegged 2012 as one of the top-ten hottest years on record. Last year, minimum Arctic summer sea-ice shrank to a new record low. I'll never forget seeing vast areas of open water at the North Pole, years ago, while collecting samples for my research during a late-summer field season. Now, there's even far less ice at the end of the Arctic summer.

Scientists already see that people are suffering from the heat-trapping emissions in the atmosphere. But when I talk to people about this, many don't always accept the science. It's likely because Americans have heard so many conflicting messages about climate change online or in the media. That's no mistake. The fossil fuel industry borrowed a political playbook from the tobacco industry before them: when scientists discover that your products are risky, attack the science.

My first personal experience with a disinformation campaign was about seven years ago. A radio program interviewed me along with someone from a fossil-fuel-funded group. At one point, I heard him say something that was not supported by peer-reviewed science. He said he had read scientific papers that made his case. Naturally, I asked him what papers he was talking about: Who were the authors? Where was their research published?

He refused to answer, even though he also claimed he was holding the papers right in front of him.

I was flabbergasted. I'd never run into someone with such a blatant disregard for facts and evidence before. It bothered me for days. But looking back, I shouldn't have been surprised. Since then, science historians and others have published accounts of the groups that dispute the realities of climate change.

Americans should be having a debate about whether our nations gets its energy from dirty coal and oil or from cleaner wind and solar; and instead, front groups have promoted the idea that established science should be debated over and over again.

Some members of Congress show signs the fossil-fuel-funded disinformation campaign still holds sway. To take one example, when a policy magazine tried to ask a senator some basic questions about climate science, he went to great lengths to avoid answering.

The years of acrimony and delay on addressing climate change will be costly for the United States as communities are affected by rising sea levels. In North Carolina, the state legislature voted to ignore scientific projections for sea-level rise at the behest of real-estate interests and a group with ties to the fossil-fuel industry. And in Virginia, the legislature approved a study of its coastlines only after references to sea level rise and climate change were removed from the bill.

The good news is that other communities are being more responsible with science. For example, Jennifer Jurardo directs a planning office in Broward County, Fla., and has been working with others in the region to use the latest scientific information to help prepare for rising seas. Florida is a densely populated state with valuable property and infrastructure on its coasts. A significant portion of south Florida is within 4.5 feet above current sea level, and sea-level rise presents huge risks there.

Jurardo isn't alone. UCS is hearing from more and more local leaders who are getting ready for a changing climate. Americans are doing more to reduce their own carbon emissions (and save money at the gas pump and on their electricity bills). Twenty-nine states and the District of Columbia are benefiting from utility requirements to ramp up renewable electricity use. And California is well on its way to reining-in emissions through a comprehensive, economy-wide program.

Still, carbon emissions are on the rise, and the planet is locking-in more changes to climate every day. Communities will have to figure out how to respond to more heat waves, wildfires and rising seas.

People face a fundamental choice about the future. Switching to cleaner energy sources would dramatically reduce the risks societies face from a changing climate. The public needs an honest debate about that. Not more disinformation.

This article appeared as Climate Reality Must Win Out Over Political Attacks on Science on the UCS blog The Equation. The views expressed are those of the author and do not necessarily reflect the views of the publisher. This article was originally published on LiveScience.com.