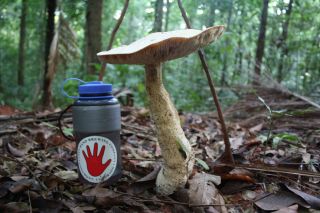 Although microscopic organisms largely drive the turnover of carbon and nutrients in soils, visual evidence of microbial activity below-ground becomes more obvious when a mushroom emerges, as in this photo of a fungal fruiting body from the Osa Peninsula in Costa Rica.
(Image: © Will Wieder)

Will Wieder is a postdoctoral researcher at NCAR who studies how information about microbes can impact climate models. This piece is adapted from a post on the blog of Alan Townsend's laboratory at the University of Colorado, Boulder. Wieder contributed this article to LiveScience's Expert Voices: Op-Ed & Insights.

As a kid, my dad told me that every business was a dirt business. This wisdom came from my father's experience as a small business owner of a sprinkler and landscaping company.

This wisdom also provided great motivation to work hard in school and pursue an academic career. Who wants to go into a dirt business? Now, it turns out my dad was right — he could have been talking about the latest piece in understanding what Earth's climate system may look like for generations to come.

Soils store carbon — lots of carbon — far more than all of the plants on Earth and the entire atmosphere combined. So the impact of that huge soil-carbon pool matters a lot to projections of what our climate may look like in the future.

While my decision to go to graduate school could be boiled down to another attempt to avoid going into the dirt business, I ended up spending months in amazing forests in Costa Rica bringing red tropical dirt back to the University of Colorado, Boulder, as part of my graduate work in the laboratory of ecology and evolutionary biology professor Alan Townsend. Great gig. Still a dirt business.

A cleaner option presented itself when I ended up in a postdoctoral position at the National Center for Atmospheric Research (NCAR). There is not much dirt in the atmosphere, and little need to travel to distant lands. I traded the dirt on my hands for a keyboard, a monitor and a wholly new challenge: trying to model the world.

NCAR builds and maintains an Earth-system model that is used to ask a variety of scientific and societally relevant questions — among them, how to make projections about what the world's climate may look like a century from now.

Predicting the future is a daunting task, and one that requires we attempt to represent a host of processes that make our virtual planet uniquely Earth-like. From wind and waves to clouds and trees, there is a lot of physics, chemistry and biology that goes into computer simulations of our world — past, present and future.

As a result, the Earth-system model incorporates many processes in general terms, with an implicit representation of the complexity inherent in any natural system. This general representation of complex processes allows us to do a pretty good job making a computer model of a planet that looks like Earth, as scientists currently know it.

The challenge, however, is that we scientists are trying to project Earth as we don't know it. Over the past decade, several studies have highlighted that the one of greatest areas of uncertainty in our computer models comes from the response of soil systems to projected environmental change. In particular, there's a growing chorus calling for models that explicitly represent microbial activity.

And so, I discovered that even climate modeling would throw me back into the dirt business.

As I learned from childhood through graduate studies, soils are amazingly complex, diverse systems — they are a fascinating business. A spoonful of soil from your garden has as many microbes living in it as there are people on Earth. Due to that complexity, many soil processes are simulated implicitly, not explicitly, in Earth-system models.

This means models need to explicitly consider the billions of bacteria and fungi living in a spoonful of soil, because these are the organisms chewing on soil carbon. These are the organisms one generally cannot see, but that can either help store carbon in soils or send it into the atmosphere, where it contributes to climate change. And scientists need to start thinking about the activity of those microbes around the globe.

This is no small task. It presents a huge challenge to soil-science and Earth-system modeling communities to think about what soils do from microbial to global scales. In a paper recently published in the journal Nature Climate Change, my colleagues and I present a framework for how scientists can begin bridging those scales. We showed that explicit representation of microbial activity is possible at global scales. And we highlighted how doing so radically changes predictions about soil carbon responses to environmental change .

So what comes next? The research community tests the model some more, and compares it with observational data from the real world; we learn what the new model can't do very well, and try to improve it; and we try to bring modeling tools into alignment with our theoretical and observationally based understanding of soil systems.

And, I finally admit that my dad was right.

This article is based on A Dirty Business, which appeared on the blogof University of Colorado researcher Alan Townsend. The views expressed are those of the author and do not necessarily reflect the views of the publisher. This article was originally published on LiveScience.com.