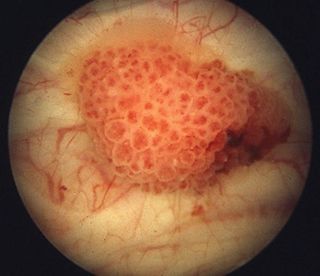 Bladder cancer is a cancer of the lining of the bladder, a piece of muscle that has multiple layers. Bladder cancer occurs more frequently among older men, with the median age of diagnosis being 73 and the media age of death being 78, based on data collected in the United States from 2003 to 2007.

Certain professionals, such as bus drivers and auto mechanics, leather workers and hairdressers, may also be at increased risk because of chemicals they work with, such as benzene, naphthylamine and ortho-toluidine.

Blood in the urine (hematuria) is the most common symptom of bladder cancer. It is characterized by urine that may appear dark yellow, bright red or cola-colored, according to the Mayo Clinic. However, hematuria can be intermittent, even when caused by serious disease, and its severity is not correlated to the severity of the underlying cancer.

Hematuria can indicate a number of maladies, including urinary tract infections, bladder stones, kidney stones and kidney cancer, but "a lot of times bladder cancer should be the hallmark of hematuria," Samadi told Live Science. "If they see blood in the urine, they should think bladder cancer until they rule out other things."

When a patient comes to the office, doctors may take a urine test to look for blood in the urine or for any abnormal cells that are shed by the bladder. Other tests include a cystoscopy — involving a long tube with a camera at the tip — that the doctor inserts into the body to see the inside of the urethra and the bladder.

"[Superficial] bladder cancer has a very typical look," Samadi said. "It has a stem. It's almost broccoli- or cauliflower-looking."

If the cancer cells are flat, it indicates that the cancer is aggressive and has a tendency to spread, he said. If invasive bladder cancer is suspected, the doctor may also order MRIs, CT scans and X-rays in order to determine if the cancer has spread to the kidneys, ureters and other internal organs.

Transurethral resection (TUR), with or without radiation therapy or chemotherapy, is one of the main treatments for superficial cancer, according to the Mayo Clinic. In this procedure, a tool with a small wire loop on the end is inserted into the bladder through a cystoscope. The tumor and the surrounding area are then burned with an electric current (fulguration) or special high-energy laser. Although the surgery has a high rate of success, patients are still advised to undergo regular cystoscopy every three months afterwards to monitor for any relapses, Samadi said.

"Bladder cancer is highly treatable if it's contained and it's in the early stage," he said. "But these superficial bladder cancers, they can recur a lot. And that's part of the reason why the follow-up has to go on for many years after that."

Segmental cystectomy, where only one part of the bladder is removed, may be used to treat invasive cancer that is low grade and has invaded only one area of the bladder wall. However, radical cystectomy, where the entire bladder is removed, is the most common type of surgery for invasive bladder cancer according to the National Cancer Institute. Some surrounding tissues, nearby lymph nodes and organs may also be removed during the procedure in order to get rid of any remaining cancerous growth. During the surgery, the surgeon will also need to reconstruct an artificial bladder and/or ureters in order to let the body store and pass urine.

"This is obviously a big operation," Samadi said. "We do them robotically now." Robotic surgery is less invasive and has less blood loss, he said.

With a robot, "I'm able to remove the bladder and build a new bladder out of small intestine," Samadi said.

In addition to surgery, patients may also undergo biologic therapy, where the bacterium Bacille Calmette-Guérin (BCG) or synthetic immune proteins are used to boost, direct or restore the body's immune response against cancer, according to the May Clinic. These treatments are often administered directly into the bladder through the urethra.