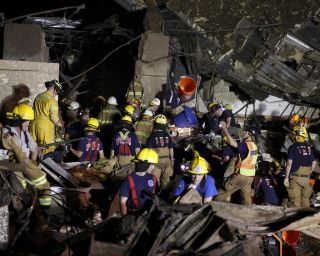 A devastating tornado struck Moore, Okla., yesterday (May 20), wreaking havoc in the town and killing dozens. Emergency personnel continue to work to search through debris, though the hope of finding survivors diminishes as time goes on. Information on the tornado is continually trickling out and being updated. We've rounded up the basic information and answers to the most common questions asked in the wake of these events. This story will be updated and added to as more information becomes available.

1.  When and where did the tornado happen?

At 2:56 p.m. CDT (3:56 p.m. EDT), a tornado touched down southwest of Moore, Okla., a city of about 55,000 people that is part of the Oklahoma City Metropolitan Area. This area is in central Oklahoma. The tornado was on the ground for 17 miles (27 kilometers) and finally dissipated at 3:26 p.m. CDT, according to the Nation Weather Service (NWS) office in Norman, Okla. The storm initially touched down 4.5 miles (7.2 km) west of Newcastle, Okla., and dissipated 4.8 miles (7.7 km) east of Moore.

2. How strong was the tornado?

The NWS Norman office gave the storm a preliminary rating of EF4, but has since revised that estimate to an EF5, the highest rating on the Enhanced Fujita scale. [Gallery: Moore Tornado Damage]

The revised rating was made after trained survey teams looked at the amount and types of damage that the storm caused. These ratings are essentially an educated guess, because the winds of a violent tornado cannot be directly measured (they destroy the weather instruments).

EF4 tornadoes can level sturdy houses and send cars and other large objects flying; they have winds estimated between 166 and 200 mph (267 and 322 km/h). EF5 tornadoes are strong enough to blow away big houses and collapse tall buildings; their winds are estimated at more than 200 mph (322 km/h).

3. How deadly was the tornado?

After reports on the number of killed and injured fluctuated and offered conflicting accounts in the first 24 hours after the tornado, the official casualty count stands at 24 killed and 324 injured, according to Gov. Mary Fallin.

4. How much damage did the tornado cause?

The precise amount of damage — in tons of debris or dollars — will take several days to fully evaluate, but the damage is severe. The tornado was on the ground for 17 miles and reportedly reached 1.3 miles (2 km) in width. Two schools were reported to be demolished, as were many other buildings around the town. [Tornado Video: 'This Is War-Zone Terrible']

5. How much warning did people have?

The NWS Norman office issued a tornado warning 16 minutes before the tornado actually formed, which is 3 minutes more than the average warning of 13 minutes. A tornado warning is issued when a trained spotter reports a tornado on the ground, or when Doppler radar indicates that a circulation in a thunderstorm could spawn a tornado. In this case, it was the latter that prompted the warning.

Not everyone is aware of warnings as soon as they are issued, though they go out on local media stations, as well as special weather radios and even some weather apps, so the amount of warning time an individual has can depend on when they actually hear the warning and how quickly they can take cover.

Meteorologists at the Norman office and other NWS offices, including the Storm Prediction Center, in Norman, Okla., had been monitoring the potential for a tornado outbreak days in advance, warning residents to be wary and sending reminders about tornado safety.

5. Could Moore be hit again?

6. What caused the Moore tornado?

The tornado formed from a string of severe storms that spawned several other tornadoes yesterday. Conditions are ripe to form a tornado in such a storm when there is warm, humid air near the surface and colder, drier air aloft, pushing over the warm air like a wedge. The cold air above causes the warmer air below to rise (because it is less dense). As the air rises, the water in it condenses out and — if the temperature in the atmosphere changes rapidly enough from surface to aloft — a thunderstorm cloud forms.

When this situation combines with winds that change strength and direction with height in the atmosphere, the system can begin to rotate. The central Oklahoma area was right near the jet stream yesterday, which meant that it was near some of the fastest, most variable winds  associated with the string of storms. An updraft can tighten the rotation and bend it upward, creating a funnel cloud; rain or hail can then push down on the tail end of the funnel, causing the tornado to touch the ground.