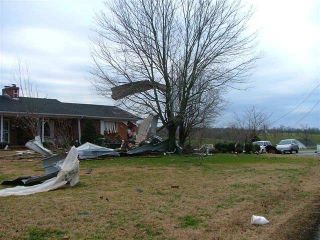 A house damaged by a tornado that swept through Montgomery Country, Ala. on Feb. 5, 2008, part of the "Super Tuesday" tornado outbreak.
(Image: © National Weather Service)

When weather alarms go off and tornado sirens begin their baleful wail, some people run for shelter, while others try to ride out the storm. A new report from the National Weather Service sheds light on the reasons why some people don't heed the warnings.

The report focuses on the "Super Tuesday" winter tornado outbreak of Feb. 5-6, 2008, so named because of the presidential primaries held on that Tuesday. During the outbreak, 82 tornadoes tore through nine states across the South, killing 57 people, injuring 350 others and causing $400 million in property damage.

Scientists with the National Weather Service and the National Center for Atmospheric Research Societal Impacts Program interviewed survivors to see what, if any, precautions they took during the storms.

The team found that two-thirds of the victims were in mobile homes and 60 percent did not have access to safe shelter (for example, a basement or storm cellar), though most survivors interviewed did try to seek shelter.

Some of those interviewed indicated they thought the threat was minimal because February is not within the traditional tornado season.

Though tornadoes are most common in Tornado Alley during the springtime, when warm, moist air from the Gulf of Mexico moves north and clashes with cooler air to create colossal twisters, local conditions can cause tornadoes to sprout up at any time of the year, even in February. In fact, a cluster of tornadoes also struck again this past February, killing eight people in Oklahoma.

Several interviewees said they spent time seeking confirmation of a tornado and went to a safe location only after they saw a twister.

The report also found that many people minimized the threat of personal risk through a thought process called "optimism bias," the belief that such bad things only happen to other people.

Tornado forecasts aren't the only natural disaster warnings that people ignore: Coastal residents also sometimes ignore hurricane warnings, either because they have no way to evacuate or do not think the storms poses a significant threat.

The new report also found that the National Weather Service issued tornado warnings on average 17 minutes in advance of all the deadly tornadoes, and that communities and citizens received those warnings and were aware of them.

According to the report, the National Weather Service will improve wording and call-to-action statements to more effectively convey the urgency and danger of events.