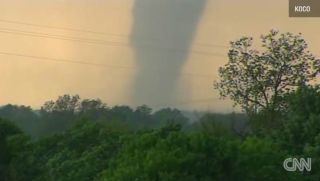 A major tornado has devstated the city of Moore, Okla., part of the Oklahoma City metropolitan area.

The tornado, which is not yet rated, hit the area at about 3:20 p.m. local time (4:20 p.m. ET). Helicopter views from local TV station KFOR show widespread devastation, with at least two schools largely destroyed, several houses on fire, and many other structures wiped out. One farmer interviewed by the station told reporters that he lost 75-100 horses in the storm, and that the others were wandering around dazed.

The exact toll of the tornado is unclear and is likely to remain so for some time. A precise evaluation of the strength of the tornado won't come until tomorrow at the earliest, when National Weather Service storm surveyors can examine the damage. KFOR meteorologists said they expected the storm would be rated at least an EF-4, if not an EF-5, the highest rating on the Enhanced Fujita Scale.

Moore was the site of a devastating EF-5 tornado that hit on May 3, 1999. A Doppler on Wheels device remotely measured winds from the storm at 302 mph (486 km/h) — the highest winds ever measured near Earth's surface.