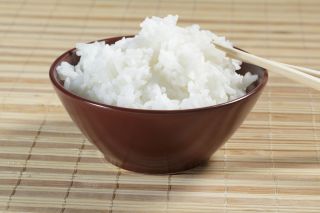 A British teenager collapsed and was rushed to the hospital this week after eating primarily chicken nuggets for the past 15 years. Stacey Irvine, 17, has reportedly survived on her nugget-heavy diet, occasionally supplemented by a bag of chips or piece of toast, since she was a toddler. Doctors have urgerd her to change her ways, but Irvine's case got us wondering: what would actually happen if you ate only one type of food for your entire life?

Depends on the poison you pick, but poison it most likely would be. According to Jo Ann Hattner, a nutrition consultant at Stanford University School of Medicine and former national spokesperson for the American Dietetic Association, choosing to eat only one fruit, vegetable or grain would lead to organ failure. Consuming only meat would eventually force your body to start munching on your own muscles. And if you stuck solely to almost any one food (besides fruit), you would develop a serious case of scurvy.

No single vegetable or legume has all nine essential amino acids humans need to build the proteins that make up our muscles, Hattner said. That's why most human cultures, without knowing anything about food chemistry, have developed diets centered on complementary veggies that, together, provide all nine. At first, without all the right amino acids, your hair starts to lighten in color and your fingernails get soft. Much worse, "your lean body mass suffers. That doesn't just mean your muscles, but also your heart and your organs." Eventually, your heart shrinks so much you die; this happens, on occasion, with extreme cases of anorexia nervosa.

Eating only one type of carbohydrate — just bread or pasta, for example — also causes organ failure, due to amino acid deficiency. On top of that, you'd get scurvy, a horrific disease brought on by lack of vitamin C, an essential component of many of the body's chemical reactions. Thanks to highly unethical experiments carried out on prison inmates in Britain and the United States in the 1940s, we know that scurvy hits after one to eight months of vitamin C deprivation (depending on the quantity one's body has stored to begin with). At first, you feel lethargic and your bones ache. Later, strange spots pop up all over your body and develop into suppurating wounds. You get jaundice, fever, tooth loss and, eventually, you die. [Why Don't Fad Diets Work?]

Life as a "meat purist" would also be a dead-end.

In addition to lacking vitamin C, most meats contain very few carbs — the easy-to-access packets of energy your body constantly requires to perform even the smallest tasks. "Without carbohydrates, you're going to start to break down some of your muscle mass to get the energy," Hattner said. Again, "muscle" doesn't just mean your biceps. You'll be eating your own heart, too.

However, there is one food that has it all: the one that keeps babies alive. "The only food that provides all the nutrients that humans need is human milk," Hattner said. "Mother's milk is a complete food. We may add some solid foods to an infant's diet in the first year of life to provide more iron and other nutrients, but there is a little bit of everything in human milk."

Technically, adults could survive on human milk, too, she said; the sticking point would be finding a woman who is willing to provide it (and enough of it). Lacking that option, the second-best choice would be mammalian milk, especially if it is fermented. "Yogurt, which is fermented milk, has a lot of bacteria that is good for the digestive tract," Hattner said.

These hypothetical scenarios aren't just whimsical speculation. In many parts of the world, people have no choice but to eat mostly one food: often, rice. Scientists are developing genetically modified rice that contains more vitamins and nutrients, especially vitamin A, in order to fight malnutrition.

Figuring out how to pack everything we need into one food is also useful for space travel, Hattner said. "The impetus of a lot of nutritional science is, 'How do we feed people in space?' Scientists are trying to increase the nutritional concentration of food so you don't have a lot of bulk."