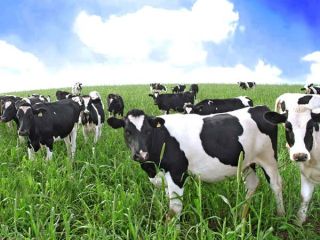 Chinese researchers have made headlines by genetically modifying a herd of 300 cattle to produce milk that is somewhat akin to human breast milk.

Chinese researchers have made headlines by genetically modifying a herd of 300 cattle to produce milk that is somewhat akin to human breast milk.

The scientists inserted a human gene into the cows' genetic information, and the animals' mammary glands now imbue their milk with large quantities of lysozyme, a protein that is abundant in human milk, but not the bovine variety. Aside from giving the modified cow milk the strong, sweet taste that you may or may not remember from your infancy, the introduction of lysozyme makes the milk much healthier and more nutritious, according to Ning Li of China's Agricultural University in Beijing, who led the research.

To help improve malnutrition among children, Li and his colleagues hope to get the modified milk through the testing phase and onto the Chinese market within three years.

But is the "transgenic" (genetically modified) milk actually healthier? And is it safe?

Initial research suggests it is indeed safe and may provide significant health benefits, experts say. But much more testing must be done — and will be done — before you see human/cow milk on the market in the United States.

"Human milk has 1,600 times more lysozyme than cow and goat milk," said Elizabeth Maga, an animal scientist at the University of California at Davis who, along with a team of researchers, conducts similar research to that of Li's group. "This protein plays a big role in putting a good set of bacteria in the intestine."

Human milk is, as you might expect, good for humans. "There are a lot of studies that have shown that breast-fed human babies are much healthier than ones that get formula, and one of the reasons seems to be that they have much better gut bacteria, which are better at protecting against diarrhea," Maga told Life's Little Mysteries, a sister site to LiveScience.

The UC Davis group has inserted the human gene for lysozyme into goats so that they produce milk with 68 percent as much lysozyme as human milk. Because the modified milk is closer than normal goat milk to what women naturally produce and babies consume, it is very likely to be safe for humans — but this hasn't been proven. [Read: Why Is Cow's Milk White?]

"We haven't done any human trials yet," Maga said. "By feeding the transgenic goat milk to baby pigs, which serve as a model for humans, we can see the impact of what the milk might do to humans."

"What we've shown is that our transgenic milk leads to a pig intestine that has a greater surface area, which allows for better absorption of nutrients, and which has more immune compounds present," Maga added. Pigs with diarrhea also exhibited improved health when fed transgenic human/goat milk.

If it has the same effects in humans, Maga said, the milk could someday help ease malnourishment caused by diarrhea, which is a leading cause of infant mortality in some developing countries. The modified cow milk wouldn't be just for babies; conceivably any malnourished person, or person lacking in gut bacteria, could benefit from drinking it.

But before that happens, transgenic milk must move to the human testing phase. In the United States and Europe, genetically modified food gets a bad rap, and so human trials will probably be much slower to happen here than in China.

"Any transgenic animal product that goes on the market has to undergo extensive characterization beforehand. I'm sure in China they have a program to do that just like they do here," Maga said. But the difference is, China has a lot more resources and personnel working on it, as well as a completely different attitude toward genetic modification (GM), she explained. "In this country and in Europe there's a very loud anti-GM lobby, with advocates claiming that GM is unsafe."

Keith Schneider, a food scientist at the University of Florida who studies food safety, concurs. "With as much flak as we have in this country over GM, it will probably take much longer than three years to make it through [the testing stage] to the market," he said.

By contrast, Sky News in Beijing reported that a man, Jiang Yao, recently tasted the human/cow transgenic milk, and had this to say about it:  "It's good. It's better for you because it's genetically modified."

To establish gene insertion as a viable method of dairy production, research must also be done to prove the human milk transgene — the one being added to the cows and goats — doesn't have any unintended consequences or side effects. So far, no abnormalities have been found in the transgenic goats' reproduction, in their immune systems or in the bacteria in their feces. But there are many more things to check. As Maga noted, "It's very hard to prove a negative."