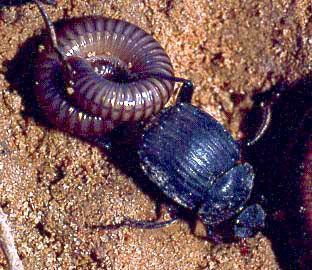 This species of dung beetle, Deltochilum valgum, first grasps onto a millipede with its hind leg, often decapitating the leggy insect before devouring its insides.
(Image: © Trond Larsen.)

A species of dung beetle has ditched its excrement-eating ways in favor of millipedes. And the beetle shows no mercy, often decapitating the leggy insect before devouring it, a new study finds.

Called Deltochilum valgum, the dung beetle is the first of its kind to show exclusively predatory behavior, taking down and consuming millipedes rather than eating primarily dung or a mixture of dung and other foods.

In the past, scientists had seen the beetle grasping live millipedes. But they weren't sure if the species specialized in exclusive millipede eating. So Trond Larsen of Princeton University in New Jersey and his colleagues set up traps in a rainforest in Peru that were baited with various foods, including dung, live millipedes, dead millipedes, injured or uninjured millipedes, fungus and carrion.

D. valgum was attracted only to the millipede traps, preferring the live, injured millipedes over dead ones.

The discovery is detailed this week in the journal Biology Letters.

Out of nearly 40 millipede attacks observed, the researchers saw one successful kill and found seven dead millipedes killed by beetles. Three of the killed millipedes had been decapitated. Overall, the beetles tended to take down millipedes much larger than themselves — While a D. valgum is under a half inch (7.2 to 8 mm, or the width of its front wings), the millipede meals had body lengths of nearly 1 to 4 inches (25 to 110 mm).

Once grasped, the millipede either coiled up its body or flailed about. When flailing subsided, the beetle chomped into a joint between the millipede's body segments. The beetle then pried upward with its head, while sawing and prying at the same joint with so-called foretibial teeth.

During the directly observed kill, the force of such prying severed the millipede's head from the rest of its body.

The beetles didn't dine on site, instead, preferring to drag the dead millipedes to another location.

"After moving of a killed millipede, beetles pried apart the rest of its body into several smaller pieces and placed their head entirely inside the segments, apparently feeding," Larsen and his colleagues write.

The researchers noted minor adaptations to the beetle's body led to large behavioral changes. Such adaptations likely evolved as a result of competition with relatives (80 or more dung beetle species can reside in the same geographic area).

The head changed. While most dung beetles sport broad heads to help them push and mold dung balls, D. valgum has a narrow, elongated head for feeding on the innards of millipedes. And instead of using its hind legs for dung-ball rolling, D. valgum uses a more curved hind leg for grasping and pulling a captured millipede.