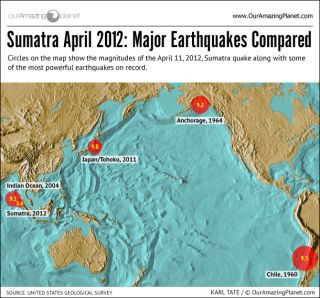 The earthquake that struck Sumatra was a big one. Here's how it compares to some record holders.
(Image: © OurAmazingPlanet)

Several earthquakes of significant strength have struck around the infamous Pacific Ring of Fire over the last few days, a not uncommon occurrence in a region prone to temblors.

First was the magnitude-8.6 earthquake that struck off the coast of the Indonesian island of Sumatra yesterday (April 11), spurring tsunami warnings and watches across the Indian Ocean basin that were later cancelled. Only a modest uptick in ocean surface heights were detected by buoys, unlike in the 2004 Indian Ocean disaster that generated a massive tsunami that killed thousands. The more recent earthquake was a different type of earthquake than the 2004 event and did not result in a large upward displacement of the ocean floor, which is typically what triggers tsunami.

Later in the day came a magnitude 6.5 earthquake on the Pacific coast of Michoacan, Mexico. It did not result in any tsunami warnings. It came a couple weeks after a magnitude 7.4 struck Oaxaca, Mexico, causing residents to evacuate buildings and causing some structural damage and minor injuries.

Later in the day, a 5.9 earthquake ruptured off the coast of Oregon.

In the wee hours of this morning, a 6.9 earthquake struck in the Gulf of California.

While it may seem unusual that all these earthquake would pop in such a short amount of time, it's not a rarity along the Pacific Ocean edges. All of these spots are active earthquake zones and are part of the so-called Pacific Rim of Fire . Around this area, the Pacific tectonic plate is colliding with other plates in a constant battle that send the plate boundaries shifting.

While the whopping 8.6 magnitude earthquake off Indonesia was somewhat unusual, it is not an unheard of event, the U.S. Geological Survey told OurAmazingPlanet yesterday.