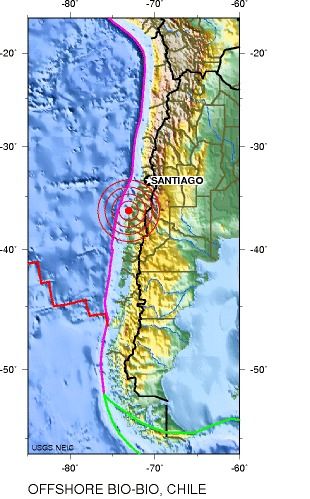 A 6.2-magnitude earthquake struck offshore in Chile today. The quake hit just after 1 p.m. local time (11 a.m. ET) in the Pacific Ocean, about 30 miles (50 kilometers) north of the city of Concepcion, according to the U.S. Geological Survey.

Although some residents felt strong shaking, the likelihood of damage is small, according to preliminary reports.

The region has a long history of powerful quakes, including the strongest earthquake ever recorded, in 1960.

In 2010, an 8.8-magnitude earthquake and tsunami ravaged the area. Scientists recorded 3-D images of the catastrophe's aftermath soon after, to better study its effects, and better prepare the area for the next disaster.