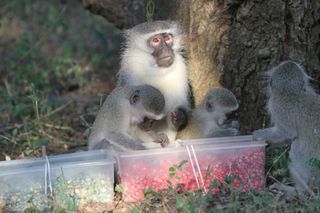 Just as human travelers often adopt the local cuisine, wild monkeys learn to eat what those around them are eating, new research finds.

A study of wild vervet monkeys (Chlorocebus aethiops) in South Africa provides proof that primates other than humans adopt and conform to cultural behaviors. Given a choice between two foods, infant monkeys ate only the foods that their mothers ate. And young males that ventured to other groups soon switched to the local diet, researchers report online today (April 25) in the journal Science.

"Some of the ways of learning that we have thought were distinctly human are more broadly shared across nonhuman primates," said study co-author Andrew Whiten, a cognitive biologist at the University of St. Andrews in the United Kingdom. [Image Gallery: Adorable Vervet Monkeys Conform to Peers]

Cultural learning and conformity play central roles in human life. Whereas many studies have documented cultural transmission in lab animals, few have shown this phenomenon occurs in the wild.

A team of researchers studied four groups of wild vervet monkeys, each containing 24 to 44 individuals (109 animals in total). The team gave each group a supply of maize corn dyed pink and another dyed blue. In two groups, the blue corn tasted bad, so the animals learned to eat only the pink corn. In the other two groups, the pink corn was unpalatable, so the animals favored the blue corn.

After four to six months, the researchers replaced the bad-tasting corn with normal-tasting stuff, but the monkeys continued to eat only the color to which they had become accustomed. In one exception, a low-ranking female ate the non-preferred type of corn, probably because she couldn't get access to the preferred type.

The infants' behavior provides an example of "potent social learning," Whiten said. Despite having no prior experience with eating the two types of corn, the babies readily adopted their mothers' dietary preference.

Next, the researchers observed what happened when young-adult males from each group migrated to another group during the mating season — a common practice that ensures genetic diversity in vervet populations. Of the 10 males that migrated to a group with a preference for the opposite food color from their native group, seven of them chose to eat the corn that the new group preferred. When no other higher-ranking males were present to intimidate them, nine of the 10 males ate the popular color of corn.

Basically, the migrant males were conforming to fit in with their new group, the observations suggest. The males' behavior was perhaps even more surprising than the babies' behavior, because they were abandoning their prior preference in favor of the prevailing one, Whiten said.

Frans de Waal, a primatologist at Emory University's Yerkes Primate Center who was not involved in the study, called the finding striking. "It is one of the very few successful controlled experiments in the wild," de Waal said, adding that "it hints at a level of conformism most of us, until now, held not possible."

Primates aren't the only animals to learn from their peers. For example, another new study shows that whales pick up feeding techniques from their friends. Collectively, these studies suggest that culture is more widespread in the animal kingdom than once thought.