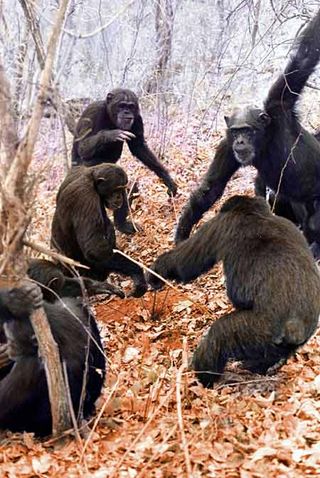 It was a big year for genome decoding. Scientists deciphered the DNA of man's best friend, along with humankind's closest relative, the chimp. Such findings are becoming so routine, however, that you might not have even noticed that the genome of rice was revealed, too. The ongoing investigation into our own DNA, meanwhile, revealed that identical twins are not so identical. Other researchers reported that about 9 percent of human genes are undergoing rapid evolution.

Chimpanzees want to be just like their friends, at least when it comes to getting food.

The social conformity displayed in a new study is a trait previously seen only in humans.

Researchers at Emory University's Yerkes National Primate Research Center presented two groups of chimpanzees a food puzzle. The chimps were faced with a small barrier that blocked food from rolling down a pipe.

They could either lift the barrier, allowing the food to roll towards them, or poke at it until it pushed the food reward down a different chute. The task was designed to recreate the type of problem solving chimps do in the wild.

Out of sight from the other chimps, researchers took aside one chimp from each group and taught each a different way to use a stick to get at the food. Erika was shown how to use the stick to lift the blockage. Georgia was taught to poke the blockage with the stick until it rolled into her hands.

"We chose those individuals because they had a lot of friends in the group and we thought that the other chimps would watch them," study coauthor Victoria Horner told LiveScience.

After they had mastered the new ways of getting food, Erika and Georgia were reunited with their respective groups. They effortlessly retrieved food from the pipes as the other chimps watched and learned.

The researchers didn't let the other chimps try the new methods for a few days, but once they got the opportunity, it didn't take them long to get the hang of it.

The members of each group faithfully used the method they were taught. But that didn't keep them from exploring the pipes.

"Putting sticks in holes is quite a chimpy thing to do," Horner said. "If you've got this group where lifting is taught, and they discover poking, which might be easier, they went back to doing the lifting. That's what leads us to believe that conformity is going on."

There was no evidence before this study that any animals other than humans felt the pressures of social conformity, the researchers say.

This research was detailed in an online posting yesterday by the journal Nature.