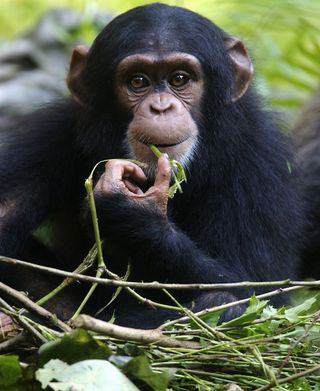 Chimps and toddlers rely on the "wisdom of the crowd" to sway their decision-making processes, new research indicates. Orangutans don't, which could be because they live solitary lives.

The researchers were interested in finding out more about social learning — how one animal picks up behaviors from others rather than learning something by trial and error. This could be anything from tool use to cultural traditions.

This social learning is present in many primate species and has been seen throughout the animal kingdom.

"We study humans, chimpanzees and orangutans, because they are closely related species, all belonging to the great ape family," study researcher Daniel Haun, of the Max Plank Institute for Evolutionary Anthropology, in Leipzig, Germany, told LiveScience. "Investigating similarities and differences between closely related species provides insight into what makes each of them unique against the backdrop of their close relatives."

The researchers did two experiments on humans, chimps and orangutans. The experiments revolved around a contraption with three different-colored sections and holes in the top. Some of the participants were trained, with treats as rewards, to put a ball in only one of the holes. The researchers wanted to see how the choices of their peers influenced an untrained participant.

In the first experiment, the researchers took 16 human toddlers, age 2, 15 chimps and 12 orangutans and showed them a group of four trained peers. Three of the group members chose one color option, while the fourth chose a different option three times (and got three rewards).

After this show, the researcher let the untrained participant into the testing chamber and let them choose a color section. The researchers found that the humans and chimps were more likely to choose the same option that the majority of their friends did (the option that was chosen three times by three different individuals), meaning they were learning from the majority. The orangutans didn't respond in the same way, randomly choosing different sections of the contraption.

In the second experiment, the researchers wanted to find out if the learning had to do with this idea of following the majority or if it just reflected the number of times the participants saw a certain choice, even if it wasn't made by different individuals.

So they had a new set of participants (14 toddlers, age 2, 14 chimpanzees and 14 orangutans) watch two of their peers play with the food-dispensing contraption. One of them got three turns to place a ball into one opening (which the researchers called the "frequent" opening), while the other only got one go (the "rare" opening) at it.

They saw that the untrained chimpanzees and orangutans, after watching their peers, distributed their balls randomly among the three options presented; only human tots preferred the "frequent" opening that they had seen their peer use three times, instead of the "rare" opening which they had only seen used once.

The difference between these primates could lie in their social strategy, Haun said.

"While chimpanzees live in large social groups all their lives, orangutans, once the offspring leaves the mother, live a largely solitary life with occasional encounters. So chimps can learn from others all their lives, while orangutans have to rely much more heavily on individual learning," he said.

This study was published online April 12 in the journal Current Biology.