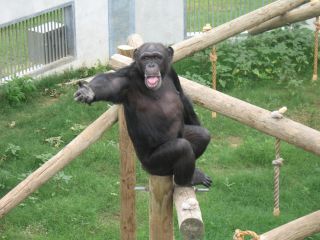 This chimpanzee is making attention-getting noises and reaching out in hopes of receiving food from human caretakers, a trait probably picked up from mother.
(Image: © Michale E. Keeling Center for Comparative Medicine and Research)

Captive chimpanzees learn from their mothers to call out to humans, new research suggests. Those chimps raised by their moms were also most likely to use similar calls, from lip-smacking to blowing kisses.

This teaching from mother to child is an example of "social learning," which played an important role in the development of human culture and language.

While social learning of tool use has been seen in chimps before, "it has never really been shown for communication before," study researcher Jared Taglialatela, an assistant professor at Kennesaw State University in Georgia, told LiveScience. Before this study, he said, "social learning of communication signals was seen as unique to human language."

The learned vocalizations are called "attention-getting sounds," because they are used by the chimps to get the attention of their human caretakers, especially if the caretaker is in possession of food or a tool the chimp needs. The sounds include grunting, blowing kisses, smacking their lips, teeth chomping and blowing raspberries.

Not all captive chimps make these calls, though researchers aren't sure why.

The researchers studied 158 chimps living in captivity at the University of Texas, MD Anderson Cancer Center. During multiple trials, the researcher stood 3 feet (1 meter) away from the chimps' enclosure for 30 seconds, with grapes in hand. The researcher either looked directly at the chimp or in another direction during the trials.

Some chimps produced calls to get the attention of the researcher, and possibly get their hands on some food, while some didn't. The researchers compared mothers and their offspring, to see if there were any patterns to the calls (or no calls).

About half (73) of the chimps made some type of attention-getting noises. Of these, 59 were mother-reared, and 12 had been raised in the nursery by humans. Of the 59 mother-reared chimps that made calls, the majority of them made the same calls as their mothers. So if the mama chimp tended to use lip-smacking or grunting, the offspring were likely to do the same. [8 Ways Chimps Act Like Us]

The researchers think social learning of communication like this may occur in both mother-offspring pairs as well as in groups of chimpanzee pals. The nursery reared chimps may have learned their calls from their nursery peers.

"The sounds may not necessarily be just from mother, but also from your social group. But for a young one, their primary partner is their mother," Taglialatela said.

The findings, detailed in the March 21 issue of the journal Biology Letters, have implications for understanding our common ancestors.

"You can now dial back to the common ancestor of human and chimps and it likely had at least some potential for socially learning communicative signals," Taglialatela said.