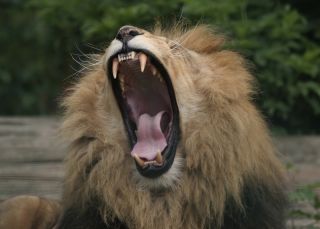 Lions and tigers may have deep, knee-quaking roars, but the sound quality is not so different from the grating cry of a newborn human. Now, a new study finds the specially shaped vocal cords and a layer of soft fat allow big cats to roar loudly with little effort.

"The lion roar is a very strong sound," said study researcher Ingo Titze, the director of the National Center for Voice and Speech at the University of Utah. "It's not very tonal, it's rough and grating. There's a purpose to that — it's attention-getting."

Humans have a different vocal-cord anatomy than lions, of course, but their cries are attention-getting too, Titze said. And both babies and lions use their vocal-cord anatomy in their favor to make loud noises without permanently damaging the larynx.

In their new research, Titze and his colleagues examined larynxes from three tigers and three lions from zoos, all of which had been euthanized because of old age and illness. [Gallery: Tiger Species of the World]

Studying animal voice boxes can help researchers understand how the various parts of the human larynx work, Titze said. All mammalian larynxes work in similar ways: Air from the lungs vibrates folds of tissue called vocal folds or vocal cords, producing sound. But the tissues and shape of the vocal folds differ among species, and understanding how the process works in one animal can help clarify how vocal-fold layers work together in another, Titze said.

In the case of the big cats, the researchers wanted to know how the animals form their loud roars, which can reach 114 decibels to someone standing a short distance away, about 25 times as loud as the noise of a gas lawn mower. The scientists dissected the tiger and lion larynxes and subjected the vocal cords to mechanical tests to understand how much strain the tissues could take.

"What's peculiar about the lion and tiger vocal folds is that they have a very flat surface on the front," Titze said. "It's almost like two parallel plates."

When just a small puff of air is blown between these two plates, vibrations start, Titze said. That's one key to the roar of a lion or tiger: They need very little lung pressure to make large vibrations, which translate to a big sound.

The second secret to a big cat's roar is a layer of fat within the vocal folds, where other animals have a ligament. Fat is squishy, offering more leeway for the vocal cords to vibrate, Titze said. The trade-off is that such floppy vocal cords can't be fine-tuned to the high pitch of a human singer, but for lions and tigers, that's not a big deal.

"It doesn't matter so much what the pitch is," Titze said. "What matters is that it's a big sound and it gets people's attention."

In contrast, he said, Rocky Mountain elk have larynxes almost the same size as a lion or tiger. But instead of fat, they have a stiff ligament backing up their vocal cords. That ligament can take a lot of tension, allowing the elk to produce a high-pitched bugling sound that seems strange coming from such a large animal.

Babies lack the fatty cushion of a lion's voice box, and their vocal cords are tiny, less than a tenth of an inch (2-3 millimeters) long, Titze said. But while a baby's cry is high-pitched, it is also grating and rough, a call that captures the attention just like a tiger's roar.

"Their vocal cords are about 2 or 3 millimeters long, I mean, very, very tiny, but they vibrate them very, very hard," Titze said. "If an adult were to do that, they would probably injure themselves."

Babies keep up their crying marathons thanks to a gel-like layer inside their vocal cords that provides cushioning. They also have a reservoir of cells in their larynx that allows them to repair tissue damage quickly, Titze said. He and his colleagues suspect that the fat cells inside lion and tiger larynxes might contain repair cells as well.

Understanding the structure of vocal cords is important for doctors who need to repair damaged larynxes in patients with cancer or other ailments, according to the researchers, who report their work today (Nov. 1) in the journal PLoS ONE. Humans have one of the most complex larynxes of any mammal, Titze said, with a ligament, a gel-like layer and muscle.

"Humans are quite complicated with the layered structure because we do so many things with our voices," he said. "So we're trying to figure out, what is the purpose of this layered structure?"