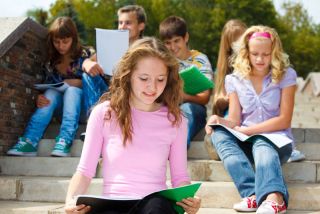 Which students do you think will become pals?
(Image: © Anatoliy Samara | Shutterstock)

Whether it's deciding what to eat or where to live, we like to have options. And the more options we have, the more varied our choices will be—right? When it comes to picking our friends, perhaps not. A new study published September 21 in Group Processes & Intergroup Relations suggests that when people are able to choose friends from a larger, more diverse group, they pick pals who are most similar to themselves. Those in smaller groups, however, wind up with dissimilar—but closer—friendships. "The ironic finding is that in more diverse environments, we find less diverse friendships," says social psychologist Angela Bahns of Wellesley College in Massachusetts, lead author of the study. She compared students at large and small college campuses to see how their social environments shaped their friendship choices. Although you might expect people who go to a large, varied campus to spend time with a more diverse group of people, in fact it just allows them to be more exclusive, Bahns says. Whereas there is a large body of research suggesting that we have a universal preference for similarity (in everything from behavior to first-name initials), similar is not always better, according to Bahns. In fact, she found that in spite of more differences in attitudes, values and behaviors, students on small campuses reported closer friendships than their large-campus counterparts. "If you live in a world where there's not much choice, you're going have to settle for people who are not as similar as you," says co-author Chris Crandall, a psychologist at the University of Kansas (K.U.) in Lawrence. "But you can be perfectly happy with friends who aren't that similar." To conduct the study, Bahns and colleagues recruited 268 students from either K.U. (a large university of over 25,000 students) or one of four smaller rural Kansas colleges of about 500 to 1,000 students each. The researchers tracked down pairs of students in public spaces—the student union or the cafeteria—and asked them to fill out a questionnaire designed to measure a wide swath of social attitudes, behaviors and values that might matter in a friendship. For example, students rated how much they agreed with statements such as: "The average person can live a good enough life without religion" or "Families work best when women do the work at home and men do the work outside the home." They also noted feelings toward various social groups, political preferences, and health behaviors such as alcohol use and exercise habits. Answers were compared to measure similarity among student pairs. Students also reported how close they were to the other person in their pair, on a scale of 1 to 7. At small schools, the average ranking was 5.9. At large schools, it was 5.2. That might not seem like a big deal, but "it's really a notable difference," Crandall says. At the very least, it implies that despite constraints imposed by the makeup of their social choices, people are pretty good at developing strong relationships with those around them. Similarity might make things easier, especially when first meeting someone, according to Crandall, but it's not a requisite for a close friendship. To make sure that the closeness rankings didn't reflect a fundamental difference between types of friendships at large and small schools, Bahns and her colleagues adjusted for a number of other variables, including how long friends had known each other and how much time they spent together. They found no differences between the large- and small-campus groups—suggesting that friendships were relatively similar in both places. The one difference they did find—which Bahns thinks explains the closeness gap—was students' perception of mobility, or how easy it would be to find new friends. "On a larger campus people perceive that they have more flexibility in swapping out their friends," Bahns says. "At a smaller college there are less alternatives, and students are aware of that." Students may invest more in their friendships if they know they can't find someone new or if they think it would be hard to move in and out of relationships easily. Although more than 85 percent of the student pairs in the study reported being friends with one another, the results could have profound implications for romantic relationships as well, according to Brett Pelham, a social psychologist at the National Science Foundation. "Are married couples who met and dated in large cities typically more similar than [those] in rural areas? Is the average Kansan married couple more diverse than the average New Jersey couple?" Pelham thinks the study raises as many provocative questions as it answers. For example, are there particular attitudes or identities for which people are much less flexible than others? "It's hard to imagine a gay man settling for a female romantic partner because he is at a small college," Pelham says. "On the other hand, he might be willing to settle for the one other guy who is also gay at a very small college…even if that guy doesn't vote, pray or eat the way he does." According to Bahns, the importance of these particular variables may very well shift from person to person as well as between cultures. To explore that issue, she is now looking beyond Kansas and across three continents, collecting data in Korea, Ghana and elsewhere in the U.S. Whereas more choice may lead to similar friends for U.S. college students, different social landscapes and broad cultural attitudes may introduce their own unique constraints on how people pick their friends.