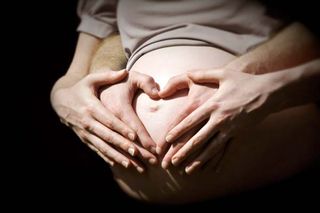 The old aphorism "you are what you eat" doesn't go far enough, a new study finds. You may also be whatever your mother eats.

When pregnant monkeys consume a high-fat diet modeled after the typical American meal plan, their offspring are more anxious and stressed compared with the offspring of moms that ate more healthfully during pregnancy, according to the research. While earlier work uncovered long-term physical health consequences in offspring of fat-consuming moms, the new study reveals similar findings about mental health, said study researcher Kevin Grove of the Oregon National Primate Research Center in Beaverton, Ore.

Given the similarities between human and non-human primate physiology and the fact that high-fat diets are the norm in America, the effect of maternal diet on babies' mental health "really is scary," Grove told LiveScience.

"Even if we take the offspring, after they're weaned from their mothers, and put them back onto a normal, healthy diet, their susceptibility to stress and anxiety still remains," Grove said. "This really appears to be a permanent issue that occurs in utero."

Lead study researcher Elinor Sullivan, also of the Oregon National Primate Research Center, presented the results Monday (Nov. 15) at the annual meeting of the Society for Neuroscience in San Diego.

Grove, Sullivan and their colleagues were researching the metabolic health of Japanese macaque (also known as the snow monkey) offspring when Sullivan noticed that liver damage and excess body fat weren't the only legacies carried by babies of moms on fatty diets. Those offspring also seemed more high-strung.

After the babies were a month old, the researchers introduced them to several stressful situations, such as having an unknown human stand near their cage. In another test, the researchers put unfamiliar toys like rubber snakes or Mr. Potato Head (so chosen because the toy's big eyes are "mildly stressful" for an infant, Grove said) in each baby monkey's enclosure.

The babies of the moms on the fatty diet were overwhelmingly more freaked out by the toys and stranger, the researchers found. That was especially true of female monkeys, which were reluctant to approach the toys (although they responded eagerly to food). The male offspring of fatty-diet moms were more likely to behave aggressively, threatening the human intruder in the stranger test, for example. Overall, the researchers report, 78 percent of the high-fat diet offspring displayed anxious or aggressive behavior during the tests, compared with 11 percent of the healthy-diet offspring.

Regardless of whether the high-fat-diet moms became obese or stayed lean, their babies were more anxious, Grove said, suggesting that it's diet, not obesity, that influences their offspring's behavior. The problem seems to lie with serotonin, a neurotransmitter that contributes to feelings of well-being, the researchers found. The brains of fetuses and babies of high-fat diet moms showed disruptions in serotonin signaling.

What may be happening, Grove said, is that a high-fat diet inflammes the placenta, which in turn exposes the developing fetus to inflammatory proteins called cytokines. Cytokines are known to disrupt the development of the serotonin system.

The researchers are now investigating ways to reverse the effects of the high-fat diet. While the damage seems to be done by birth, altering the maternal diets during pregnancy reduces anxiety symptoms in offspring, Grove said. That's a lesson human mothers-to-be should take to heart, he said.

"Pregnancy is a very vulnerable period in time for the developing fetus, obviously," Grove said. "But it's also a time of opportunity for long-term improvement of health in the offspring."