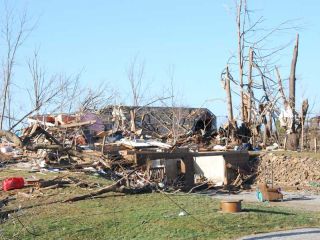 Tornado damage in Henryville, Ind., after a tornado swept through the small community on March 2, 2012.
(Image: © Michael Raphael/FEMA.)

March is typically when tornado season ramps up, with spring's unstable weather giving rise to thunderstorms and twisters. But this year has been relatively quiet so far.

By early April 2012, there had been 290 tornadoes, including 60 tornado-related deaths. But this year, there have only been about 137 reported twisters, resulting in two fatalities, National Weather Service (NWS) records show.

So why so few twisters? The main reason is that, so far, it has been a colder-than-average spring and late winter, at least for much of the central and eastern United States, which is where most of the country's tornadoes occur. This can be blamed largely on a stationary mass of warm air over Greenland and the North Atlantic that has blocked the normal flow of air from west to east and south to north, Greg Carbin, a meteorologist with the NWS' Storm Prediction Center, previously told OurAmazingPlanet. This flow of air, known as the jet stream, usually brings more warm, moist air from the south as the Northern Hemisphere begins to heat up in the spring.

Instead, winds have predominated from the north, bathing the eastern two-thirds of the United States in Arctic air. This tamps down the formation of tornadoes, which depend on muggy air to fuel their creation and destructive power, Carbin said. [Infographic: Tornado! How, When & Where Twisters Form]

A comparison with last year is somewhat incomplete, since 2012's tornado season got off to a roaring start, thanks to plenty of moist, warm air brought north from the Gulf of Mexico, which helped fuel the month's 154 tornadoes, a cluster of which hit on March 2-3 and were the year's first billion-dollar disaster. March 2012 was the warmest March on record in the United States, according to the NWS.

The average number of tornadoes for March is 76; this past month, there were only 17 reported, Carbin said. The month was also tied as the second-coldest March since 2000.

This week actually marks the anniversary of the deadliest tornado outbreak in U.S. history, which occurred on April 3-4, 1974. The Super Outbreak, as it is called, saw 148 twisters touch down in 13 states, killing 330 people.

Another 5,484 people were injured in a path of destruction that covered more than 2,500 miles, according to the National Oceanic and Atmospheric Administration (NOAA).

"Deadly storms such as the 1974 super outbreak can and will happen again," said meteorologist Ken Haydu in a NOAA statement. "The people who experienced the super outbreak have an important story about tornado awareness and preparedness to pass on to later generations."

Looking into the near future, the cold gripping the eastern United States and lack of extreme weather isn't likely to last. The blocking pattern that has helped lead to cold weather is already weakening, and warmer temperatures are expected early next week as warm air from the Gulf may be allowed to move north. This could also lead to the first significant outbreak of severe weather early next week, Carbin said.

"It does look like there will probably be more storminess in the middle of the country and we have one system moving across the Midwest on Sunday (April 7), and Monday, that could maybe bring some hail and gusty winds," Carbin said. "And that one perhaps sets the stage for a more substantial outbreak of severe weather perhaps by Tuesday to Wednesday."