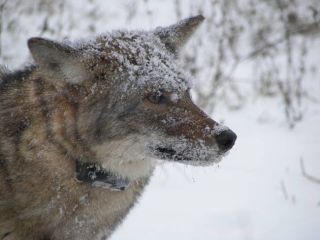 Coyotes are members of the Canidae family and share a lot of the same traits of their relatives: wolves, dogs, foxes and jackals. They have narrow, elongated snouts, lean bodies, yellow eyes, bushy tails and thick fur.

Known for howling at the moon, coyotes hunt at night and howl to communicate their location. They are also known for being "wily"; in fact, they are very smart creatures and have a heightened sense of hearing, smell and sight.

Coyotes are about as big as medium-size dogs, though they are smaller than wolves. They are 32 to 37 inches (81 to 94 centimeters) from head to rump, according to National Geographic. Their tail adds another 16 inches (41 cm) to their length. Coyotes typically weigh about 20 to 50 lbs. (9 to 23 kilograms).

Coyotes live in North America and roam the plains, forests, mountains and deserts of Canada, the United States, Mexico and Central America. Some even live in tropical climates.

As humans take over more and more countryside, coyotes are adapting to living in cities to find food. In fact, it is becoming more and more common to see coyotes in big cities like New York and Los Angeles.

Coyotes are solitary creatures and mark their territory with urine. When hunting deer, however, they use teamwork and form packs. They take turns pursuing the deer until it tires, or they may drive the prey toward a hidden member of the pack, according to the University of Michigan’s Animal Diversity Web (ADW).

These hunters are nocturnal, meaning they sleep during the day and hunt at night. This is why people usually only hear coyotes howling at night. Coyotes also use other noises to communicate. They use three distinct calls — a squeak, a distress call and a howl, according to the ADW.

Coyotes are not picky eaters. They eat small game such as rodents, rabbits, fish and frogs, and larger game like deer. Their diet is 90 percent mammalian.

They are typically thought to be only meat eaters, but they are actually omnivores — they eat meat and vegetation. When they aren't snacking on bigger prey, they will eat snakes, insects, fruit and grass. Coyotes have been known to kill livestock and pets, but they usually help control agricultural pests, such as rodents. In cities, coyotes will eat pet food or garbage.

Breeding season is in February and March. In the spring, females build dens in preparation for their young. Females have a gestation period of 63 days and give birth to groups of three to 12 young at once. The groups of babies are called litters and each coyote baby is called a pup. The size of the litter depends on where the coyotes live. In areas where there are a lot of coyotes, there will be smaller litters. In areas with fewer coyotes, more pups will be born.

Both the male and female participate in taking care of the pups. The male will bring food to the female and the pups and help protect them from predators.

According to the National Trappers Association, a female coyote will stay in her den with her pups until their eyes open. This can take 11 or 12 days. By fall, the pups are old enough to hunt for themselves. Coyotes are usually ready to mate at 20 to 22 months old. In the wild, coyotes live around 10 years, according to the ADW.

Coyotes can also mate with dogs. The offspring are called "coydogs." Coydogs don't have a very big population because they tend to mate and have babies during the winter, making it harder for the pups to survive. Also, males do not help the females take care of the pups, which also lead to poor survival rates.

The taxonomy of coyotes, according to the Integrated Taxonomic Information System (ITIS), is:

Coyotes are not endangered. In fact, some believe that the coyote population has never been higher. Farmers and ranchers have tried controlling the population with poisons, guns and traps, but the populations are still growing, according to the International Union for Conservation of Nature (IUCN). In fact, since 1861, 500,000 coyotes have been killed by the U.S. government to hamper population growth. This is a task that cost taxpayers around $30 million, according to The Educational Broadcasting Corp.

Coyotes are very quick creatures. They can run around 40 mph (64 km/h).

To distinguish the difference between coyotes and wolves, scientists looked at both species' DNA, according to the Journal of Mammalogy.

Males will travel up to 100 miles to find food when their current home is overpopulated.