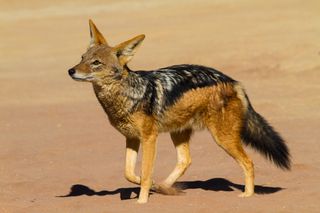 Jackals are a type of canine, animals that are related to dogs, coyotes, foxes and wolves. They look like a cross between a German shepherd and a fox. They have the fox's small face, delicate legs and fluffy tail, with the German shepherd's long, alert ears.

There are three species of jackal. There's the black-backed jackal; the golden, or common, jackal; and the side-striped jackal. All three species are about the size of domestic dogs. They grow to 27 to 33 inches (70 to 85 centimeters) shoulder to rump, with a tail length of about 10 inches (25 cm).

The distinguishing characteristics of each species are denoted in their common names, according to the ADW. The black-backed jackal has black hair running from the back of the neck to the tail. The rest of the body is reddish-brown or ginger and the chest is white. Side-striped jackals are light gray to tan with a white stripe from elbow to hip and black side stripes. The golden jackal's coat is usually yellow to pale gold and brown-tipped, but the color can vary with season and region.

Jackals live primarily in Africa, but in different regions.

The black-backed jackal stays mostly in savannas and woodlands. There are two discrete populations. One lives at the southern tip of the continent in South Africa, Namibia, Botswana and Zimbabwe. The other is found along the eastern coastline, including Kenya, Somalia and Ethiopia. The populations are separated by the Olduvai Gorge in Tanzania, an area with harsh terrain that is difficult to cross.

The side-striped jackal likes it a little on the wetter side. It is found predominantly in tropical Africa and prefers moist savannas, marshes, bushlands and mountains, according to the African Wildlife Federation.

The golden jackal likes it dry, in deserts, open savannas and arid grasslands. It is the northernmost species, living in North and East Africa, as well as southeastern Europe and South Asia to Burma.

Some jackals are social creatures, while others are not. Some live together in small groups called packs, while others live alone or in pairs. Packs typically include around six members.

Jackal pairs do everything together, including eating and sleeping. They are also very territorial and defend their territory as a team. They also hunt together. According to the ADW, jackal pairs who hunt together are three times more likely to get a successful kill than a single jackal.

Jackals are often both diurnal and nocturnal. This means that they are active during dawn, dusk and night. Side-striped jackals are the exception. They are strictly nocturnal.

As omnivores, jackals like to eat both meat and vegetation. Their diet consists of leftovers from other animals' kills, ground-dwelling birds, reptiles, antelopes, fruits, insects, berries and grass. They're not picky, though. They will also eat human trash if something more suitable isn't available. Jackals will even eat decomposing or diseased flesh, according to Animal Planet.

Jackals have one mate for life, and both parents help take care of the young. After a gestation period of 57 to 70 days, the female will give birth to two to four babies in her underground den. They are born with their eyes sealed shut and it take them around 10 days for their eyes to open.

Baby jackals are called pups. Pups eat mother's milk and regurgitated food until they are weaned at 2 months.

Most jackal pup deaths happen before they are 14 weeks old. Many are swooped up by eagles and eaten. To protect her pups, a mother jackal changes her den every two weeks.

Pups start hunting at around 6 months, but mom and dad still take care of them as long as they need it. Jackals become sexually mature at 6 to 11 months of age. Some jackals leave their parents at 11 months. Some stay and babysit, protect and feed their younger siblings. Jackals typically live 10 to 12 years.

Here is the taxonomy for jackals, according to the Integrated Taxonomic Information System (ITIS):

The three species of jackal are not endangered and are listed by the International Union for Conservation of Nature' Red List of Threatened Species as least concern. This means that their populations are mostly stable and they are found in multiple regions.

Each jackal family has their own yipping sound that only members of their own family respond to.

Side-striped jackals can hoot like owls. Because of this, they are called "o loo" by the Karamajong people of Uganda.