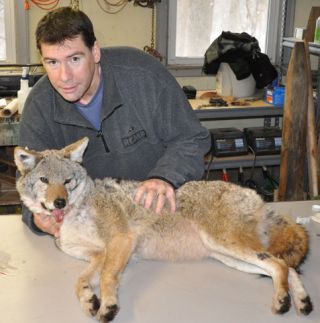 Stan Gehrt, a wildlife ecologist at Ohio State University, inspects a coyote captured in the greater Chicago area as part of a long-running study on this increasingly common urban resident.
(Image: © Stan Gehrt)

Many urbanites in Chicago and other big cities have gotten used to the presence of coyotes, what with the wily animal popping up in everyday locations like a Quiznos sandwich shop, as happened in 2007. But the animal's presence in urban areas sets the stage for larger predators like wolves, mountain lions and bears, which might be harder to live with, according to one coyote researcher.

About 5 miles (8 kilometers) from Chicago O'Hare International Airport is the smallest coyote territory ever found, which takes up all of a third of a square mile (0.8 square km).

That coyotes can survive in such a small area means they have plenty of food on which to survive. "They're finding everything they need right there, in the suburbs of Chicago," Stan Gehrt, an Ohio State University researcher, said in a statement. "It amazes me."

Coyotes are the largest mammalian predators to have made their way into and thrive in urban settings. But still larger animals could follow the same path.

"The coyote is the test case for other animals," Gehrt said. "Raccoons, skunks, foxes —they've already been able to penetrate the urban landscape pretty well. The coyote is the most recent and largest. The jury's out with what's going to happen with the bigger ones."

Gehrt has been tracking coyotes in the Windy City since 2000, and has put tags on about 680 of the animals, tracking 50-60 of them at a time. His research has revealed some surprises: For example, unlike their rural kin, urban coyotes are monogamous, sticking with one mate for life. That's pretty rare in the animal kingdom, he said.

Mountain lions and bears have been seen in increasing numbers in some areas. One mountain lion was recently shot in the Wrigleyville neighborhood of Chicago, for example. But unlike coyotes, mountain lions and bears are more likely to move into urban areas to find food, before returning to the countryside to reside, said Stewart Breck, a wildlife specialist at the National Wildlife Research Center, in Fort Collins, Colo.

Still, bears occasionally take up residence in urban areas, and this is a trend that could increase, Breck told OurAmazingPlanet. Breck recently started a study of human-coyote interactions in the Denver metropolitan area, where he guessed there may be approximately 500 coyotes.

The movement of these wild animals into urban areas could present challenges for both humans and animals trying to coexist.

"It used to be rural areas where we would have this challenge of coexistence versus conflict with carnivores," Gehrt said. "In the future, and I would say currently, it's cities where we're going to have this intersection between people and carnivores," he said.

That said, there has been little conflict between the 2,000 coyotes that live in the Chicago metro area, and its 9 million human residents.

In fact, many Chicagoans have come to appreciate coyotes. A Chicago Fire Department boat recently rescued a coyote dubbed Holly who was stranded on an ice flow in Lake Michigan.

Coyotes are usually docile around people, and there is only one known case of the animals killing a human adult — a lone hiker was reportedly attacked by two coyotes in Nova Scotia in 2009.

"We used to think only little carnivores could live in cities, and even then we thought they couldn't really achieve large numbers," Gehrt said. "But we're finding that these animals are much more flexible than we gave them credit for and they're adjusting to our cities."

Gehrt will describe his research today (Oct. 5) in a talk at EcoSummit 2012, an international conference focused on ecological sustainability being held in Columbus, Ohio, this year.

While there are more people than ever before, there are also more carnivores moving into cities, Gehrt said.

In comparing his findings about coyote survival in cities to research by another group on those living in rural areas, Gehrt has found that the urban coyote pup survival rate is five times higher than the rate for rural pups. In both environments, humans are the coyotes' primary predator, either through intentional removal or accidental death from automobiles.