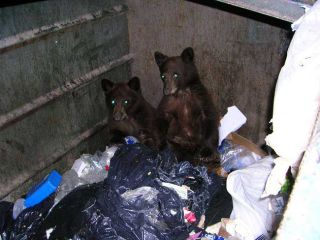 A pair of black bear cubs got more than they bargained for when they went digging for food inside a dumpster at a Nevada campground in 2006. The dumpster's bear-proof lid, which someone had left open, closed on the cubs after they climbed inside.
(Image: © Jon Beckmann/Wildlife Conservation Society)

As bears spend more time near cities, the animals gain weight, get pregnant at a younger age and die young, violent deaths.

A new study of black bears near the populated Lake Tahoe, Nev., area found an alarming percentage are hit by cars.

"Urban areas are becoming the ultimate bear traps," said Wildlife Conservation Society researcher Jon Beckmann, the study's lead author. "Because of an abundant food source — namely garbage — bears are being drawn in from backcountry areas into urbanized landscapes where they meet their demise."

The study, published in the Fall 2008 issue of the journal Human-Wildlife Conflicts, tracked 12 bears over a 10-year period living in urban areas around Lake Tahoe, and compared them to 10 other bears that lived in outlying wild areas.

The urbanized bears weighed an average of 30 percent more. They gave birth between the ages of 2 and 5 instead of at age 7 or 8 as is normal.

For now, bear populations in Nevada remain steady due to bears immigrating from neighboring California, the researchers said.