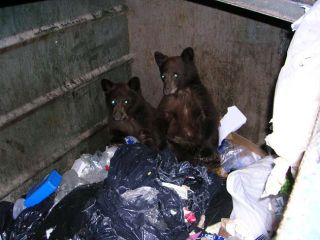 A pair of black bear cubs got more than they bargained for when they went digging for food inside a dumpster at a Nevada campground.

The dumpster's bear-proof lid, which someone had left open, closed on the cubs after they climbed inside [image].

The cubs were discovered after their agitated mother and a third cub were seen patrolling various dumpsters on the site and calls were made to scientists at the Wildlife Conservation Society (WCS) and Nevada Division of Wildlife (NDOW).

Previous studies by the agencies showed that black bears with access to human leftovers will readily become "couch potatoes" that neglect foraging for their natural foods, which include grasses, berries and pine nuts. To avoid potential conflicts between human and bears, legislation was passed that required human trash be deposited in bear-resistant containers.

"Obviously, when the lids are left open, the dumpsters won't keep the bears out," said Jon Beckmann of WCS. The  Zephyr Cove Campground in Lake Tahoe, Nevada, where the cubs were discovered, will be cited for having other dumpsters on site that were not bear-proofed.

The entire bear family was tranquilized and released together in a mountain region near the campsite. Scientists fitted the mother bear with a radio collar so they could track her movements.