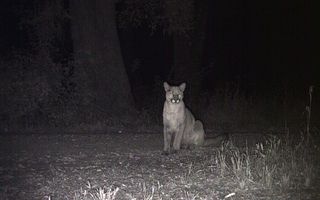 Most of the images were captured by the cameras between dusk and dawn.
(Image: © Jasper Ridge Biological Preserve at Stanford University)

To catch a glimpse of a mountain lion, automatic cameras seem to be the best bet, as the elusive wildlife are not much for interacting with humans and they prefer nighttime jaunts.

The camera traps shoot pictures and video when they sense any movement, typically from any passing animal. They record in infrared, so even in the dark of night, when the mountain lions like to roam, the animal can be visualized. [Camera Trapped: Photos of Wonderful Wildlife]

The cameras were installed in the preserve in October 2008, but didn't catch any mountain lions until September 2009; since then, the cameras have recorded more than 40 photographs and videos of mountain lions in different areas of the preserve, on 24 separate days. There seem to be one male, one female and possibly several cubs that use the area. [See camera-trap images of the mountain lions]

The data from the summer of 2010 indicates that these mountain lion images most likely come from one group, not other lions passing through. The animals also show a seasonal pattern of activity, visiting more during the dry months, from May to September.

The lack of previous camera-trapped lions, from the first 10 months and during an earlier camera trap experiment, also indicates that something might be changing. The mountain lions could be shifting ranges or their population may be changing.

"One of the very encouraging things about all of the mountain lion pictures is that we know that we essentially have an intact ecosystem with the top predator actively killing deer," Trevor Hebert, data manager for the reserve, which is located 5 miles (8 kilometers) from Stanford University's campus, said in a statement. "We weren't always sure that was the case."

While the deer might want to watch out for the mountain lions, humans have little to fear. Historical data indicates that the likelihood of being attacked by a mountain lion in Jasper Ridge is 1 in 10 million.

"Jasper ridge seems like a secluded place, it's really part of a continuum of the south bay [of San Francisco] which is heavily urbanized, there's millions and millions of people" Steven Litvin, a postdoctoral scholar at Stanford, said in a video released by the university. "There are a few sightings a year, and when you consider the relatively small area they have been squeezed into, there isn't really that much interaction with them by humans."

"We humans present a greater risk to mountain lions than mountain lions present to us," Stanford postdoctoral researcher Kye Epps, who served on a consulting team focused on assessing the risk that the lions might pose, said in a statement. "We still have this very charismatic mammal in our backyards that we have the opportunity to protect."