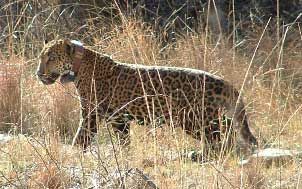 A jaguar was caught and collared with a satellite tracking device for the first time ever in Arizona on Feb. 18, 2009.
(Image: © Arizona Game and Fish Department)

The once-common jaguar has become a rare sight in North America, thanks to hunting and habitat fragmentation.

Now two were spotted in exceedingly rare and unrelated events this month.

The Arizona Game and Fish Department caught and collared a wild jaguar in Arizona for the first time, officials said Thursday. While a handful of the big cats have been photographed by automatic cameras in recent years, the satellite tracking collar will now help biologists learn more about this animal's range.

Meanwhile, a jaguar was spotted in central Mexico for the first time in a century. Scientists photographed the cat with an automatic camera set alongside a trail thought to be frequented by the spotted felines.

Jaguars (Panthera onca) once ranged from southern South America to the southern United States. By the late 1900s, none were thought to exist north of Mexico, but two independent sightings in 1996 confirmed jaguars still reached as far north as Arizona and New Mexico. Remote cameras have also photographed jaguars in the Amazon.

The species has been protected outside of the United States under the Endangered Species Act since 1973. That protection was extended to jaguars in the United States in 1997, the year after their presence here was confirmed.

Details of the sightings below.

The male cat in Arizona was captured southwest of Tucson during a study aimed at monitoring habitat connectivity for mountain lions and black bears. The healthy beast weighed in at 118 pounds with a thick and solid build.

Satellite tracking showed the cat traveled more than 3 miles from the capture site in the first day after its release, officials said.

"While we didn't set out to collar a jaguar as part of the mountain lion and bear research project, we took advantage of an important opportunity," said Terry Johnson, endangered species coordinator for the Arizona Game and Fish Department. "More than 10 years ago, Game and Fish attempted to collar a jaguar with no success. Since then, we've established handling protocols in case we inadvertently captured a jaguar in the course of one of our other wildlife management activities."

Biologists are trying to determine if the collared jaguar is Macho B, a male cat that has been photographed by trail cameras periodically over the past 13 years.

In 1997, a team was established in Arizona and New Mexico to protect and conserve the species. The Jaguar Conservation Team (JCT) began working with Mexico two years later, recognizing that the presence of jaguars in the United States depends on the conservation of the species in Mexico.

Interestingly, the project set up to do all this is funded by Arizona Lottery ticket sales.

No jaguars had been spotted in central Mexico since the start of the 20th century.

Scientists trying to find footprints, excrement or any other signs of the jaguars had in recent years interviewed residents, none of whom had ever seen one. Nonetheless, the researchers now report having obtained three photographs of a male jaguar and ten excrement samples that have been attributed to the jaguar, said Octavio Monroy-Vilchis of Autonomous University of the State of Mexico.

In a statement, researchers explained there are 15 areas in Mexico in which it is unknown whether jaguars still exist, whether their populations are stable, and if their habitat is adequate. These areas are important for scientific studies, because they could include crucial zones for the felines' long-term survival.

"The photographs provide information about new recording sites, and allow us to deduce that the area where the animal was observed may be a corridor connecting jaguar populations," Monroy-Vilchis said.

Jaguars are the only cats in North America that roar. They're considered the largest cats in the Western Hemisphere. Adults commonly weigh up to 211 pounds (96 kg), though 300-pounders have been reported. In the northern range they  typically weigh between 80-120 pounds, however.

Females breed year-round and have litters of one to four cubs that stay with their mother for nearly two years.

Jaguars can live in several types of forest, grassland and dry habitat. They prey on a variety of animals, including fish, birds and reptiles. The largest contiguous area of habitat now remaining for jaguars centers in the Amazon Basin.