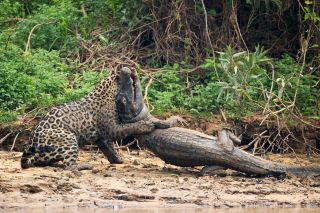 A jaguar ambushes a giant jacare caiman high up on the Three Brothers River (Rio Tres Irmaos) in the Pantanal in Mato Grosso, Brazil, on Sept. 26, 2017.
(Image: © Chris Brunskill Ltd/Getty)

A crocodile-like caiman became lunch for a jaguar in the Brazilian Pantanal, and a wildlife photographer was there to document every gruesome minute.

United Kingdom-based wildlife philosopher Chris Brunskill shot almost 50 gigabytes of images of the jaguar-caiman matchup, which ended when the big cat dragged its prey into the dense forest on the banks of the Rio Tres Irmaos. Though caimans seem more suited to hunting than being hunted, they're a common meal for Brazilian jaguars (Panthera onca). This one was an ambitious target for the young jaguar, though. Brunskill wrote on his Facebook page that it was the largest jacare caiman he'd ever seen along the riverbanks in the marshland known as the Pantanal.

"After a long struggle, she immobilised the giant reptile with the trademark jaguar bite to the back of the skull, and then dragged the huge carcass for over twenty minutes across an open beach into thick cover," Brunskill wrote. [See Photos of the Battle Between the Jaguar and Caiman]

Jaguars are the only remaining species in the genus Panthera found in the New World. They live mostly in South America and the southern portion of Central America, though the occasional wanderer dips into southern Arizona. The species used to range across the entire American Southwest, but were trapped and shot to make way for ranching and other human activities.

In the Pantanal, an enormous tropical wetland located mostly in Mato Grosso do Sul, Brazil, jaguars still stalk their prey. They eat at least 85 different species, according to a 1996 report by the cat specialist group for the International Union for Conservation of Nature (IUCN).

Caiman are one of those species. Jacare, or yacare, caiman are common species in the Pantanal, according to the conservation site crocodilian.com. Adults grow between 8.2 and 9.8 feet (2.5 and 3 meters) in length. Jaguars may have specifically evolved to hunt prey like caiman: According to the IUCN report, their thick jaws, stout skulls and unique tendency to kill by biting through their prey's skull may be adaptations that allowed jaguars to hunt well-armored reptilian prey like caiman and turtles.

Other favorite jaguar foods include deer and tapirs, as well as capybaras, which are the world's largest rodents. In fact, the jaguar captured in Brunskill's photographs charged a group of capybaras several times before pouncing on the caiman, he wrote. Earlier during his trip to the region, Brunskill captured a photograph of another jaguar stalking capybara by the riverbank and a third big cat leaping from the riverbank into the water in a failed attempt to catch a caiman.

Brunskill has photographed caiman-versus-jaguar fights before, including shots that made headlines in 2014. (That time, the caiman got away.) Caiman, for their part, rarely seem to kill jaguars. According to Crocodilian.com, they prefer less wily prey, including fish, snakes and snails.