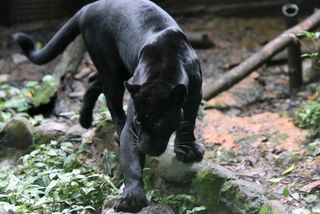 An Arizona woman has been released from the hospital with minor arm injuries after being attacked by a caged jaguar at the Wildlife World Zoo near Phoenix. According to a statement from the zoo, the woman, in her 30s, climbed over a barrier to get closer to the exhibit for a selfie with the jaguar on Saturday (March 9), when the cat reached through the bars of its enclosure and slashed the woman's left arm.

"We do not hold the jaguar responsible for what happened, and it has been concluded that the injuries were caused due to human error," zoo spokesperson Kristy Morcom told NBC news. She added that this is the second time a guest has been injured after getting too close to the jaguar's enclosure. (The zoo subsequently tweeted that the jaguar will not be put down.)

Footage of the enclosure taken by NBC shows that a low concrete barrier surrounds the jaguar's cage, several feet away from the enclosure's bars. Several eyewitnesses told NBC and other news outlets that the attacked woman first climbed over the barrier to get closer to the animal. [Dying for a Selfie? Why People Risk Their Lives for Self-Photos]

After the jaguar dug its claws into the woman's arm, several bystanders immediately responded to her cries for help. One woman reportedly shoved her water bottle through the cage bars to distract the jaguar, while her son pulled the injured woman to safety.

A desire to take novel selfies leads to risky behavior, particularly in young men, social scientists have found. According to a 2018 study in the Journal of Family Medicine and Primary Care, there have been 259 documented deaths associated with selfies between 2011 and 2017 — and 72.5 percent of those who died were men. Causes of selfie-related deaths include animal attacks, drowning, falling and vehicular accidents.

The injured Arizona woman reportedly returned to the zoo on Sunday morning (Mar. 10) to apologize for trespassing.