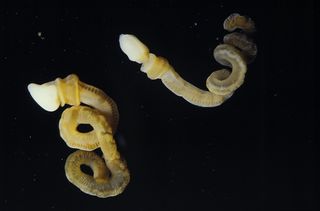 A fossilized creature shaped (let's just say it) remarkably like a penis may be the missing link connecting two mysterious branches of sea creatures.

The fossils, more than 9,000 specimens in all, reveal a wormlike animal with an "elongate posterior trunk ending in a bulbous unit," as researchers describe it in this week's issue of the journal Nature. The animal appears to be a transition in the evolution of wormlike tube feeders known as pterobranches.

Pterobranches are part of a group called the hemichordates, along with another bunch of wormy sea creatures called enteropneusts, or acorn worms. But while pterobranches are tiny and stay in one place, filter-feeding from colonies of tubes on the seafloor, solitary acorn worms move about in burrows, feeding on organic material that drifts down to the ocean floor. Acorn worms range in size from a few millimeters to a few meters long.

The links between these two groups are mysterious, but now scientists from the Royal Ontario Museum, the University of Cambridge and the University of Montreal say they may have found the connection in the Burgess shale. This formation in the Canadian Rockies holds fossils from the middle Cambrian Period, about 505 million years ago.

Previously, the oldest acorn worms, or enteropneusts, dated back about 300 million years, said study researcher Jean-Bernard Caron, the curator of invertebrate paleontology at the Royal Ontario Museum in Toronto. But the 505-million-year-old Burgess shale held enteropneusts much older than that.

In fact, the specimen, now named Spartobranchus tenuis, is one of the most common fossils found in the Burgess shale, Caron told LiveScience. Smithsonian Institution paleontologist Charles Walcott first reported the discovery of the worms in 1911. [See Photos of the Phallic Worm]

"He just wrote three lines about this worm," Caron said. "He was not sure what it was. And basically nothing was done since."

Caron and his colleagues analyzed 9,000 specimens of the worm — no easy task, Caron said, because in many cases the portions of the fossils containing key anatomical features were missing or covered up by the bodies of other fossilized worms.

The creature grew to about 4 inches (10 centimeters) in length and had a phallic body shape (not unlike modern acorn worms) lined with gills. But most important, it is found fossilized with a tube structure about 25 percent of the time, much like a modern pterobranch.

"They are like the enteropneust worms, but they live in tubes, which are quite branching and quite rigid," Caron said. "We think it is from a tube of this kind that the pterobranch tubes evolved."

The finding clears up a mystery about whether today's modern hemichordates started out as tube-dwelling worms or as mobile burrowers.

"For once, the fossil record has spoken in a voice that is more or less unambiguous," Nature editor Henry Gee wrote in a commentary accompanying the study.

The discovery also pulls back the curtain on the origin of the chordates, a group of animals with spinal cords that includes vertebrates such as humans, Caron said. Hemichordates, chordates and echinoderms like starfish and urchins all had a common ancestor with gill slits, Caron said.

"We think it's possible that the common ancestor for all three groups was wormlike," Caron said.