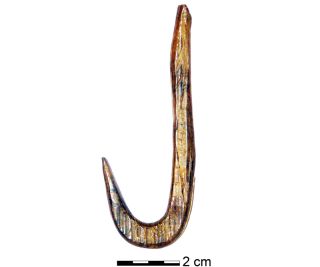 Archaeologists unearthed six fishhooks that date to 12,300 years ago, with one made from a 19,000-year-old mammoth tusk
(Image: © B. Gramsch)

Scientists have unearthed six fishhooks, the oldest of which was made from a 19,000-year-old mammoth tusk.

Hunters of ice age reindeer around 12,300 years ago likely left the fishhooks, along with mammal and fish bones, in an open field in what is now Wustermark, Germany. The fishhooks, which are the oldest found in Europe, suggests humans developed fishing tools earlier than previously thought, probably to catch fast-moving fish that appeared in lakes as the climate warmed.

"These people had strong ideas to use the new resources of this changing environment," said Robert Sommer, a paleoecologist at the University of Kiel in Germany. The eel, perch and pike that entered lakes are too fast to snag with a harpoon or a spear, Sommer added.

The findings are detailed in the May 2013 issue of the Journal of Archaeological Science.

Most archaeological evidence for ancient seafood consumption has washed away with rising sea levels. In 2011, scientists discovered the world's oldest fishhooks in coastal caves in East Timor (formerly part of Indonesia).  But because the hooks were not complete, they relied heavily on nearby fish bones to draw their conclusions.

And until now, archaeologists in Europe thought hunter-gatherers around 12,000 years ago speared slow-moving fish like salmon in shallow streams, but didn't use hooks until much later, Sommer told LiveScience. [The 10 Biggest Mysteries of the First Humans]

Sommer and his colleagues unearthed several Paleolithic finds during a routine environmental assessment prior to building a shopping mall 12.4 miles (20 kilometers) west of Berlin.

The site, which was once an open field near an ancient lake, revealed six fishhooks, along with animal and fish remains. One of the fishhooks was carved from ivory from a mammoth tusk, while the rest were made of reindeer or elk bones closer to 12,300 years of age.

Because mammoths went extinct before the fishermen lived, the people probably found a whole tusk and used it millennia later, Sommer told LiveScience.

The fishhooks are impressive because they show the sophistication of ancient hunters, said Sue O'Connor, an archaeologist at the Australian National University, who found the East Timor fishhooks, but was not involved in this study.

"There's a lot of planning that's gone into the development of these particular hook shapes," O'Connor told LiveScience. "You've got to have it at the right angle so it actually hooks the fish, otherwise the fish just gets off."