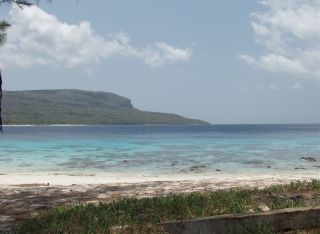 Many caves and rock shelters, such as Jerimalai shelter where the oldest fish hooks were found, are located in the uplifted Pleistocene reef terraces at the east end of the island of Timor.
(Image: © Image courtesy of Susan O'Connor)

The world's earliest known fish hooks reveal that humans fished the open sea for much longer than previously thought.

Past studies have revealed that early humans were capable of crossing the open ocean as far back as 50,000 years ago, such as they did to colonize Australia. Until now, however, evidence that such mariners could fish while in the open sea dated back only to 12,000 years ago.

"In most areas of the world, evidence for our early ancestors' coastal exploitation is now submerged — it was drowned by rising sea levels," researcher Sue O'Connor, an archaeologist at Australian National University in Canberra, told LiveScience.

Now O'Connor and her colleagues have found evidence of prehistoric fishing gear and the remains of large fish such as tuna at a cave shelter known as Jerimalai, located in the Southeast Asian island nation of East Timor.

"East Timor became a new independent nation in 1999 when they voted for independence from Indonesian rule," O'Connor noted. "Most of the country's infrastructure was destroyed when the Indonesians withdrew and tens of thousands of people were killed during the fight for independence."

"However, the country is rebuilding, and it never ceases to amaze me that people who have experienced so much hardship and who are so poor can be so generous," she added. "I think working with the local East Timorese people who always assist my field team has been one of the most uplifting experiences of my life."

Their discovery uncovered fishing hooks made from bone that date back to about 42,000 years ago, making them the earliest definitive evidence of such tools in the world.

"It is possible that people caught the tuna in the deep channel that lies off the coast of the Jerimalai shelter," O'Connor said.

About half the fish remains at the site came from pelagic fish such as tuna, ones that dwell near the ocean's surface or deeper in the water. Capturing such fast-moving fish requires a lot of planning and complex maritime technology, suggesting that early humans developed these skills earlier than previously thought.

"There is a lot of debate about whether or not early modern humans had the ability to hunt animals and fish that were difficult to capture," O'Connor said. "I think the Timor evidence demonstrates that people definitely had this ability very early."

Some other scientists might say that most of the fish bones seen are from juvenile fish, and thus might have been caught more easily off the coast as opposed to in open waters. "While this may be the case, it is still not easy matter to catch tuna — it would require nets set in deep water," O'Connor said.

The scientists detailed their findings in the Nov. 25 issue of the journal Science.