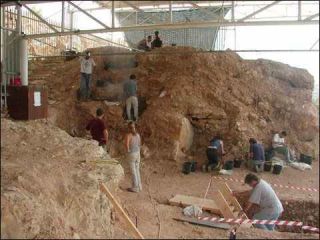 Anthropologists work to excavate Qesem Cave, where early human hunters carved up their prey. The cave was discovered in Israel about nine years ago.
(Image: © Qesem Cave Project)

Early humans who lived in caves more than 250,000 years ago were just as good at bringing home the bacon as their later human descendents of the Paleolithic era, though their dining habits were a little less refined, a new study suggests.

The remains of early human dinners were found in Qesem Cave in Israel, which was discovered during road construction in hilly limestone terrain, 7 miles (11 km) east of Tel Aviv about nine years ago. ("Qesem" means "surprise.")

In the cave were leftover bones from deer, aurochs, horse and other big game that made up the meals of the hunters who dwelled in the cave 400,000 to 200,000 years ago. Mary Stiner, an anthropologist at the University of Arizona, examined the cut marks left on these bones by ancient butchers to better understand how early societies hunted and divvied up the spoils of their labor.

Meat is one of the most nutrient-rich foods that humans eat, but it's much harder to bring down a buck that to pick berries.

Just how proficient the earliest hunters were hasn't been well-known, but Stiner's work indicates that they were just as good at felling their next meal as hunters who came thousands of years later.

"There's a lot of speculation as to whether people of the late Lower Paleolithic were able to hunt at all, or whether they were reduced to just scavenging," Stiner said. "Evidence from Qesem Cave says that just like later Paleolithic humans, the earlier Paleolithic humans focused on harvesting large game. They were really at the top of the food chain."

The bone cut marks did show some differences between the peoples of different stages of the Paleolithic, namely in the skill and ceremony they attached to meat cutting and sharing. Those of the Lower Paleolithic were less efficient, less organized and less specialized when it came to carving up their prey.

"This is somewhat expected, since the tools they made took considerable skill and locomotor precision to produce," Stiner said.

The randomness and higher number of the cut marks from earlier sets of bones also show that the earlier hunters attached little social ritual or formal rules to meal time, Stiner said. Lots of hands would have been reaching in to carve up a tasty morsel from the bone.

But by the Middle and Upper Paleolithic, the regular and efficient cuts on the bones suggest that "meat distribution flowed through the hands of certain butchers," Stiner said.

Stiner said her findings, detailed in the Aug. 11 issue of the journal Proceedings of the National Academy of Sciences, need to be replicated elsewhere before the results can be generalized.

"I think it will be important in the future to see if the kinds of results I have found at Qesem can be replicated in at least some other cave sites in the region and, hopefully, in other regions as well," Stiner told LiveScience. "We can always expect some variability in site contents within a period and geographic region, however, so it is not expected that every late Lower Paleolithic site would present the same butchering patterns, but some of them should."