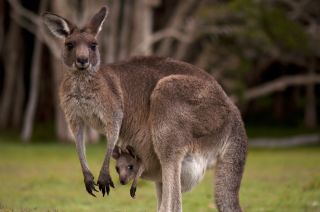 A kangaroo mother and her joey.
(Image: © Renate | Shutterstock)

Kangaroos are large marsupials that are found only in Australia. They are identified by their muscular tails, strong back legs, large feet, short fur and long, pointed ears. Like all marsupials, a sub-type of mammal, females have pouches that contain mammary glands, where their young live until they are old enough to emerge.

Kangaroos are in the Macropodidae family, which also includes tree-kangaroos, wallabies, wallaroos, quokkas and pademelons. When people think of kangaroos, the four species that typically come to mind are in the genus Macropus: the antilopine kangaroo, the red kangaroo, the western gray kangaroo and the eastern gray kangaroo. They are sometimes referred to as the "great kangaroos" because these species are much larger than other kangaroos.

However, there are 12 species of tree-kangaroos in the Dendrolagus genus, according to the Integrated Taxonomic Information System. And, bettongs, in the Potoridae family, are called rat-kangaroos.

Most kangaroos live on the continent of Australia, though each species has a different place it likes to call home. For example, the musky rat-kangaroo likes to nestle down in little nests on the floor of the rainforests in northeastern Queensland. Gray kangaroos like the forests of Australia and Tasmania, on the other hand. The antilopine kangaroo can be found in the monsoonal eucalyptus woodlands of extreme northern Australia. Tree-kangaroos live in the upper branches of trees in the rainforests of Queensland, as well as on the island of New Guinea.

Kangaroos are the only large animals that hop as a primary means of locomotion. Their springy hind legs and feet are much stronger and larger than their arms (or "forelimbs"). According to the San Diego Zoo, kangaroos can cover 15 feet (7 m) in a single hop and can hop as fast as 30 mph (48 kph). Usually, 20 mph (32 kph) is considered their cruising speed. When feeding, kangaroos use a slower, walking movement, and for that they use their muscular tail as a kind of fifth leg, pushing off the ground as they move along.

Kangaroos are social and live in groups called a mob, a herd or a troop. Kangaroos in a mob will groom each other and protect each other from danger. If a kangaroo suspects there is danger in the area, it will stomp its foot on the ground to alert others. If it comes to blows, a kangaroo will box and kick its opponent.

Kangaroos are herbivores. They eat grasses, flowers, leaves, ferns, moss and even insects. Like cows, kangaroos regurgitate their food and re-chew it before it is ready to be totally digested.

Probably the best-known fact about kangaroos is that they carry their young in a pouch. A female kangaroo is pregnant for 21 to 38 days, and she can give birth to up to four offspring at one time,  though this is unusual.

Inside the pouch, the joey is protected and can feed by nursing from its mother's nipples. Joeys urinate and defecate in the mother's pouch. The lining of the pouch absorbs some of the mess, but occasionally the mother will need to clean it out, which she does by inserting her long snout into the pouch and using her tongue to remove the contents. A young joey will remain attached to a nipple while the mother does this, but any older ones will be temporarily kicked out.

Another interesting fact about the mother kangaroo is that she is able to suckle two joeys at different developmental stages at the same time with milk that has different nutritional content, the New York Times has reported.

Joeys grow quickly, though, and at 14 to 20 months for females or 2 to 4 years for males, they will be fully matured.

The taxonomy of kangaroos, tree-kangaroos and rat-kangaroos, according to ITIS, is:

There is a rich fossil record for kangaroo ancestors and ancient relatives; giant kangaroos plodded through the Pleistocene (2.6 million to 11,700 years ago) and the Pliocene (5.3 million to 2.6 million years ago). And about 20 million years ago, tiny ancestors of modern kangaroos and a related group of kangaroos with fangs scurried through dense forests in northwestern Queensland, Australia, a region that is now arid outback.

In a study published in February 2016, scientists described a new kangaroo genus, Cookeroo, and two new species: Cookeroo bulwidarri, dated to about 23 million years ago, and Cookeroo hortusensis, which lived between 18 million and 20 million years ago. These ancient kangaroos' bodies probably measured about 17 to 20 inches (42 to 52 centimeters) long. C. bulwidarri and C. hortusensis didn't hop, navigating their forest home on all fours and sharing it with a diverse collection of animals: marsupial moles, feather-tailed possums, ancient koalas and crocodiles.