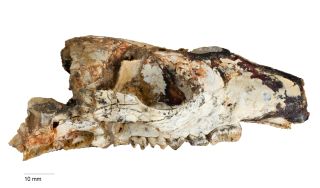 Two newly described species of tiny kangaroos that lived between 18 million and 23 million years ago scurried rather than hopped, a new study finds. But although these pint-size kangas were short on bounce, they outperformed their fanged kangaroo relatives, which lived alongside them and eventually went extinct, researchers say.

In a recent study, researchers described a new kangaroo genus, Cookeroo, and two new species: Cookeroo bulwidarri, dated to about 23 million years ago,and Cookeroo hortusensis, which lived between 18 million and 20 million years ago.

Both species were found at the Riversleigh World Heritage area in northwestern Queensland, Australia, a location recognized as one of the richest fossil deposits in the world, according to the United Nations Educational, Scientific and Cultural Organization (UNESCO) World Heritage Center. [See Photos of Kangaroos, Wallabies & Other Cute Marsupials]

According to Kaylene Butler, the study's lead author, the new genus occupies a position near the base of the kangaroo family tree that includes all modern kangaroos and wallabies, their close relatives. Butler, a paleontologist at the School of Earth Sciences at the University of Queensland in Australia, told Live Science in an email that the team figured out where to place Cookeroo by comparing 119 different features representing 69 kangaroo species.

"Cookeroo is distinguished as a genus by the combination of a number of features on the skull and teeth" — points of comparison that were also used to distinguish between the two new species, Butler said.

The newfound minikangaroos are "the size of very small wallabies," with bodies that probably measured about 17 to 20 inches (42 to 52 centimeters) long, Butler said. The landscape at the time was very different from the arid outback it is today, Butler said. C. bulwidarri and C. hortusensis likely inhabited a dense forest, moving through it on all fours and sharing it with a diverse collection of animals: marsupial moles, feather-tailed possums, ancient koalas and crocodiles.

The direct competition between the two groups may have contributed to the fanged kangaroos' extinction, Butler suggested in a statement, though it is not certain what features provided Cookeroo with the advantage.

"The fossil record for kangaroos is quite rich," Butler said. "We have giant kangaroos from the Pleistocene [2.6 million to 11,700 years ago] and Pliocene [5.3 million to 2.6 million years ago], as well as other sites similar in age to Riversleigh where we see our tiny ancestors of modern kangaroos as well as the fanged kangaroos."

However, there is still much to learn about kangaroo evolution, and new fossil finds help to bring this ancient lineage more clearly into focus, Butler said.

"Hopefully, further study of these new species will help us understand just what is so special about the ancestors of modern kangaroos — why did they survive when, at the same time, the fanged kangaroos went extinct."

The findings were published online Feb. 17 in the Journal of Vertebrate Paleontology.