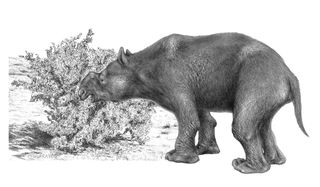 A treasure trove of giant marsupial fossils — including one named Kenny — has been uncovered in Australia. The bones will help researchers better understand these ancient pouched mammals, and figure out why they went extinct.

These giant marsupials of the genus Diprotodon lived in what is now Australia from about 1.6 million years ago up until about 25,000 to 50,000 years ago. They roamed the continent eating vegetation, but died out when large numbers of humans moved into the area. Being such enormous creatures — standing at 13 feet (4 meters) and weighing up to 6,100 pounds (2,800 kilograms) — Diprotodon likely had to scarf down as much as 330 pounds (150 kg) of vegetation daily, research has found.

The researchers uncovered the remains of about 50 Diprotodon individuals at BHP Billiton Mitsui Coal's South Walker Creek mine site in Queensland where researchers have been excavating since 2009. The fossils date back 100,000 to 200,000 years ago, the researchers told the BBC.

"It's a paleontologists' gold mine where we can really see what these megafauna were doing, how they actually behaved, what their ecology was," study researcher Scott Hocknull, from the Queensland Museum in Brisbane, Australia, told the BBC. "With so many fossils it gives us a unique opportunity to see these animals in their environment, basically, so we can reconstruct it."

As to why the Diprotodon fossils were all found together, the researchers think the animals must have gotten trapped somehow in what was a boglike area. They were possibly there taking refuge from dry conditions (for example, a long drought) that forced them to leave their normal environments in search of water. Other sites, like Lake Callabonna, contain similar collections of Diprotodon skeletons — in that case, researchers think the large mammals got stuck in the mud as the lake bed dried out during another long drought.

The skeletons of these wombatlike animals didn't fossilize peacefully, Hocknull told the BBC: "We're almost certain that most of these carcasses of Diprotodon have been torn apart by both the crocodiles and the lizards, because we've found shed teeth within their skeletons from both animals."

The site contains one huge example of a Diprotodon, which the researchers nicknamed Kenny — one of the most well-preserved examples of the giant "furry rhino." Its jawbone is more than 2 feet — about 28 inches (70 centimeters) — long.

The researchers also found the teeth of a huge prehistoric lizard called megalania whose body would have been 20 feet (6 meters) long, and the teeth and body plate of a prehistoric crocodile. Towering super-kangaroos up to 8 feet (2.5 m) tall, along with the remains of tiny frogs, rodents and fish, have also been discovered at the location — an important find in what is now an extremely arid region, the researchers say.

"They will allow us to reconstruct what the environment was like when these giants were alive, and more importantly, what has changed to the ecosystem since then," Hocknull told the Telegraph.