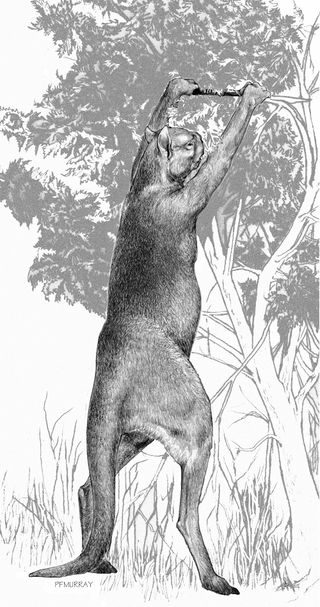 Sthenurus, an extinct browsing kangaroo that disappeared from Australia about 40,000 years ago.
(Image: © Drawing by Peter Murray)

Humans landed on the shores of Australia more than 45,000 years ago. The land they encountered was full of huge plant-eating animals, such as the 6,000-pound rhinoceros wombat and  giant kangaroo. Sadly, things would soon change.

Soon after humans settled on Australia, some 55 giant animal species vanished from Australia, with various theories, from climate change to human hunting, put forth to explain the extinction.

Now, researchers have discovered that the arrival of these humans was likely the driver of intense changes to the region, which led to the annihilation of Australia's giant herbivores and drastic changes to the habitat that turned a patchy, shrub-filled landscape into a fire-prone grassy eucalyptus forest.

"People turn up in Australia and it's quite soon after that you start to see this series of events unfolding," study researcher Christopher Johnson, of the University of Tasmania in Australia, told LiveScience. "There were big changes in the way everything looked and what plants and animals you would have seen."

Large animals have drastic effects on their habitats: They disperse seeds, they chomp down plants that fuel fires and they recycle nutrients. For example, a 330-pound (150 kilogram) kangaroo called Sthenurus used to roam the Australian rain forests, picking through the plants and creating patches in the landscape. [Marsupial Gallery: A Pouchful of Cute]

That means changes to herbivore populations show up in records of the plants they eat. To figure out how populations of Australia's giant herbivores changed, what their effect was on the landscape and the possible cause, the researchers analyzed plant spore, pollen and charcoal levels in two samples from Lynch's Crater in northeast Australia, an area which used to be a body of water within a rain forest. The first sample dates back to between 130,000 and 24,000 years ago and the second reaches from 53,000 to 3,000 years ago.

The spores, charcoal (released from the burning of plants) and pollen would have fallen from the air, landed on the surface of the water, sank down and settled in layers on the muddy bottom. Over time, layer upon layer piles up, with the most recently deposited mud on top. "You can look down through the sediments and look down in time," Johnson said.

In the new study, published today, March 23, in the journal Science, researchers found a severe drop-off in Sporomiella spores around 41,000 years ago, suggesting a drastic decrease in certain plant-eating animals.

Sporomiella is a fungus that is dependent on the digestive systems of herbivores to survive. After passing through their stomachs and intestines, the fungus grows on their feces. Without these giant herbivores and their giant droppings, the spores can't survive.

Because these large animals reproduce slowly, it would have been easy for a small population of humans to hunt enough that the populations couldn't rebound.

Then, just a few hundred years later, records showed a big increase in the amount of charcoal in the ground, suggesting a dramatic rise in the number of fires. After the fires, pollen levels changed. Pollen are unique to plant species and can be used to determine which plants and trees were living at a given time. The terrain seems to have been taken over by a new type of plants: grassy ones on the forest floor and an overhang of eucalyptus plants.

The timeline seems to rule out climate-induced habitat changes as the culprit for the mega-herbivore extinction, as "both climate and vegetation had been stable for the previous five millennia," writes Matt McGlone, a researchers from Landcare Research in New Zealand that wasn't involved in the reserach, in a Perspectives piece published in the same issue of Science.

"It's the big animals declining that causes the increase in charcoal and the change in vegetation that we see," Johnson said. "It basically changed everything."

This isn't a one-time event, the researchers said. Large herbivores died off in other parts of Australia and around the world as humans entered their midst. Another site in Australia that Johnson's team studied showed similar results, though the data aren't published yet.

Such drastic landscape-changing die-offs could happen in modern times, they say. For example, large herbivores such as elephants, giraffes and rhinoceros in Africa have a huge effect on the landscape, literally knocking over trees at times. "If you took them out, there would be a big ecological effect, the whole landscape's structure would be gone," Johnson said.

"It's something we need to care about for management of environments today, and it puts a deep time perspective on these same changes," Johnson said. "This is something going on for a long time."