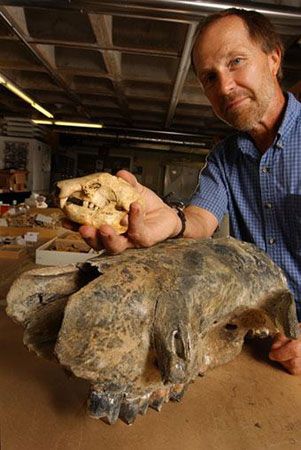 A skull of a giant sloth.
(Image: © University of Florida/Kristen Bartlett)

Weapon-wielding humans, and not warming temperatures, killed off the sloth and other giant mammals that roamed North America during the last Ice Age, a new study suggests.

The arrival of humans onto the American continent and the great thaw that occurred near the end of the last Ice Age both occurred at roughly the same time, about 11,000 years ago. Until now, scientists were unable to tease apart the two events.

To get around this problem, David Steadman, a researcher at the University of Florida, used radiocarbon to date fossils from the islands of Cuba and Hispaniola, where humans didn't set foot until more than 6,000 years after their arrival on the American continent.

The West Indian ground sloth, a mammal that was the size of a modern elephant, also disappeared from the islands around this time.

"If climate were the major factor driving the extinction of ground sloths, you would expect the extinctions to occur at about the same time on both the islands and the continent since climate change is a global event," Steadman said.

His findings are detailed in the Aug. 2 issue of the journal for the Proceedings of the National Academy of Sciences.

This could also explain why more than three-fourths of the large Ice Age mammal species -- including giant wooly mammoths, mastodons, saber-toothed tigers and giant bears -- that roamed many parts of North America became extinct within the span of a few thousand years.

"It was as dramatic as the extinction of the dinosaurs 65 million years ago," Steadman said.

If climate change were the major factor in the mass extinction, fewer animals might have been affected, since most species of plants and animals can adapt to temperature changes.

Steadman said that temperature changes might have still played an important role in their demise, however, making some animal species more vulnerable to humans than they might otherwise have been.