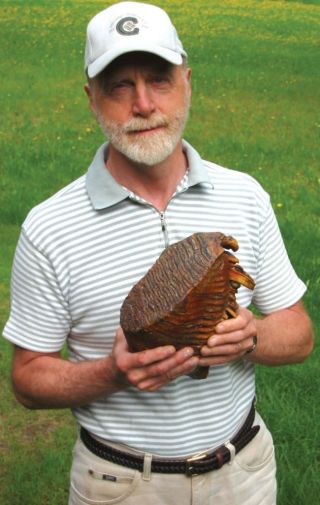 R. Dale Guthrie, professor emeritus from the University of Alaska Fairbanks, holds a typical mainland mammoth molar. Smaller molars have been found on St. Paul Island, where mammoths died off 3,000 years later than on the mainland.
(Image: © Mareca Guthrie)

Like an Ice Age version of Land of the Lost, a group of woolly mammoths survived mass extinctions on their own island hideaway.

The majority of mammoths died out about 11,000 years ago, at the end of the Pleistocene era. But on St. Paul Island, one of the Pribolofs 300 miles off the Alaskan coast, a small number of the six-ton behemoths apparently lasted an extra 3,000 years.

Such resilient populations have been discovered on other continents, but this is the first evidence of mammoths outlasting the Pleistocene in North America. R. Dale Guthrie from the University of Alaska Fairbanks studied radiocarbon dating of fossil remains and showed that the mammoths were on St. Paul 7,908 years ago.

"With the present data, the idea isn't very controversial, but more data may show they lasted a little longer on the island than my one date," Guthrie told LiveScience.

Using records of sea level changes from dated corals and sea stands, as well as maps of the contours of the Bering Sea, Guthrie determined how the St. Paul mammoths got there and later became stranded.

During the last glacial maximum, the sea level was 120 meters lower, allowing the mammoths to walk to the Pribilofs along a flat, exposed plain. But the large land bridge to St. Paul disappeared 13,000 years ago due to glacier ice melt.

This isolation appears to have spared the islanders from the pressures that killed off their mainland relatives. Paleontologists debate whether over-hunting or the arrival of competitive species (like wapiti and bison) was the primary factor in the widespread extinctions.

Mammoths, however, could not have survived on any old island. Guthrie believes the current size of St. Paul, about 36 square miles, would have been too small to provide the food necessary to sustain a large enough gene pool. To explain this, he points to evidence that the island was five to 10 times larger in the past.

Guthrie speculates in a recent Nature article that island shrinkage led to the eventual demise of the island hold-outs, as opposed to an invasion by sea-faring humans.